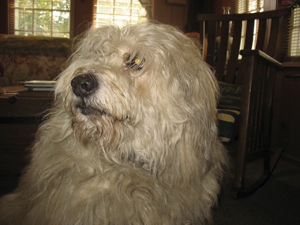 He was a year-old shelter dog. But even an animal deserves a second chance in life, so we adopted this shaggy, skinny mutt along with his behavior baggage from possible abuse and neglect. For more than 13 years, he brought calamity, chaos, character and charm into our lives. He was loving almost to a fault with family, friends and strangers alike.

Finding an appropriate name for this unkempt, untrained, over exuberant pet was more difficult than selecting saints’ names for our four children. For 25 years we had raised two pedigreed Siberian Huskies readily named Niika Tzar and Kiska Kahn. While perusing the Bible for an appropriate canine name we came upon the Book of Tobit. My wife and I looked at each other and said aloud together, “He’s a Toby!”

Unaccustomed to being indoors, couches and chairs were challenges Toby enjoyed hurtling. If there were people on them, he became their 85-pound lap dog. Toby once jumped on a table, over a davenport with an assembled quilt rack behind, turning it into a collapsed “trampoline.” The dinner table was a convenient, easy-to-reach snack.

Toby’s built-in insecurity prompted my wife to lay beside him nearly every day for a year to build-up his trust in us. He was impossible to hold still for trimming, even by a professional. When we did manage to brush him, an immediate hardy shake on his part returned his look to shabby chic.

Toby was fast for his size and weight. He used to run with me, hardly breaking stride, while I struggled to keep the fast pace he set. Just walking him was vigorous exercise for the human on the other end of his leash.

Despite his exuberance, Toby had a gentle side. He joined our household about two weeks after my 90-year-old cousin, Carl, had agreed to live with us for care and companionship. He had never lived with a dog and was a little hesitant about Toby. But they became good friends. Toby would sit next to Carl’s chair – not on his lap – and turn so Carl could pet and talk to him. His gentle voice seemed to calm Toby’s enthusiasm and the dog’s willingness to listen offered Carl an outlet to talk about his day.

“Dogs know instinctively how to get us out of our emotional doldrums – all they have to do is stick to their script” (Dogs & Devotion, The Monks of New Skite).
It’s only been in the last few years we decided Toby may not have been the lowly mutt we initially thought he was. He, in fact, had the looks and characteristics of a Briard-Bearded Collie crossbreed. Whatever his origin, he had a purebred heart of love and loyalty wrapped in fur. His gift of devotion inspired my wife to volunteer weekly at the local animal shelter and we foster puppies occasionally at home until they are old enough for adoption.

“Perhaps one of the reasons we are so devoted to our dogs is that they help us become who we’re supposed to be” (Dogs & Devotion).

All dogs, in fact, possess an indomitable spirit for life that teaches up to their last day. That unfortunate day came earlier this year when we made the difficult decision to put Toby down due to crippling arthritis and overall failing health. His absence has left a large hole in the house our two Miniature Schnauzers can’t completely fill.

“…our dogs cannot understand and find meaning in their suffering, and they trust us to have their best interests in mind, even when it means making a final decision” (Dogs & Devoation).

Some folks say that death ends our relationship, but how can they be so presumptuous as to know the Mind of God concerning His creation? Just because a dog, or any animal, does not have an immortal soul, doesn’t mean there is no life for that creature after death.
“God looked at everything he had made, and he found it very good” (Gn 1:31).

With its emphasis on the “good” of creation in Genesis, we wonder what will happen in an afterlife. Will not God remember all the creatures He made? In Rev 21:1 concerning “a new heaven and a new earth,” God seems to be going well beyond just making all human beings new when He says, “Behold, I make all things new” (21:5). We simply do not know what awaits us in heaven (1 Cor 2:9).

“We can find many other instances in the Bible …in which God’s creatures collaborate with us in our journey toward salvation and in carrying out God’s designs” (I Will See You in Heaven, Friar Jack Wintz). Consider Noah and the ark (Gen. 6-9) wherein God’s plan is to save the human family and the rest of creation. In the Book of Jonah God saw that the people and the animals turned from their evil ways, and He changed His mind about the calamity that was to befall Nineveh.

“O God, enlarge within us the sense of fellowship with all living things, our brethren the animals to whom You have given the earth as their home in common with us. May we realize that they live, not for us alone, but for themselves and for You, and that they love the sweetness of life” (The Liturgy of St. Basil).