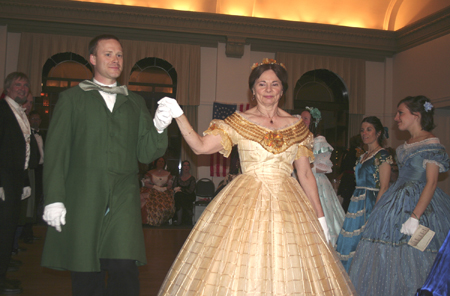 One hundred and fifty years ago, the United States entered into the bloodiest war in its history. It lasted for four years. During this war more men died than any other war in our history. It was the Civil War (1861 – 1865).

Today re-enactors bring back to life the activities of the Civil War, and for the 30th Indiana Volunteer Infantry, Co. F, it began in the 1960s. These men and women historically portray a living history to include battle re-enactments, military drills, parades and other related educational activities-one of them happened on Saturday, March 26-the 14th annual Military and Citizens Spring Ball.

Going back in Civil War time, a dance or a Grand Ball was held as entertainment. According to diaries, autobiographies and letters of first-person accounts, the Civil War dances were social events. It was an event where everyone was expected to be happy and cheerful in order to forget the raging war, even for a few hours. The idea was to circulate and enjoy the company of others. These dances were not couple events. Believe it or not, it was considered very rude for couples to dance together more than two or three times in an evening.

Among the assembled throng of the Ball were young and old, as well as homely and beautiful, but from the perspective of a social responsibility, all that was irrelevant. During the course of the Ball, all guests present were on an equal social status. Thus a general’s wife would not refuse to dance with a lieutenant based on his lower military rank, nor would a United States Senator need refrain from asking a dressmaker.

Prior to the Grand March there is a social hour. Upon entering each guest received a dance card. Each card was printed with a list of the evening’s dances on the left side of the page. On the right side, are lines or spaces where a gentleman will “pencil in” names and/or a description of an available woman for a specific dance.

Ladies did not typically ask a gentleman to dance in the 1860s, nor did anyone dance with a person whom they did not know or had not been properly introduced to. Gentlemen (including married men) were expected to always have an eye open for unattached ladies so that an inquiry could be made as to whether the lady would like to dance. A gentleman could dance with as many ladies as were willing.

When a gentleman asked a lady to dance she was expected to agree, unless she had already been approached for that dance by another gentleman or she was sitting that particular dance out because of fatigue. To refuse one gentleman and then accept another for the same dance was considered bad manners and was considered an insult not only to the first gentleman who asked but to the host of the Ball as well.

When it is time for that particular dance on the dance card, the gentleman will come to find his dance partner. He would then escort the lady by first having his right palm upwards and the lady would rest her left hand on his, they then entered the dance floor.
In the context of the event you would sooner or later swing, turn or join hands with everyone.

Sir, madame and other appropriate titles were heard throughout the evening as well as please and thank you. Bows and curtseys when being introduced or before or after a dance was noticed as well.

Once the dance has ended the gentleman thanked the lady and asked whether she would care to be escorted to a seat or perhaps would like a glass of water or punch (no alcohol or smoking is allowed during this type of event).
In the elaborate Grand Ballroom of The Woman’s Club downtown Fort Wayne, members of the 30th Indiana and re-enactors from the Midwest traveled back in time to re-enact a 19th century formal Victorian-style Ball.

On the evening of Saturday, March 26th guests were welcomed at 6pm for a social hour and photography. The Grand March commenced at 7pm.
During the Grand March ladies in their elegant hoop-skirted ball gowns were presented to the grand assembly by men in their dress blues. As in Civil War times, everyone wore gloves as to not soil their clothes.

This year’s Grand March and first dance was led by President and Mrs. Lincoln. The floor managers were Dr. and Mrs. Russ Gilliom and Lee Frinzi. Sue Pfeiffer, a member of the Homefront involved in Civil War reenacting since 1991, served as dance mistress. She called out instructions as dancers promenaded, sashe’d and do-si-do’ed to a live vintage dance band. Hog Eye Navvy played authentic music of the Civil War era, tunes such as Soldier’s Joy, Virginia Reel, Cumberland 8 (quadrille), Irish Trot and Gay Gordon.

Giving the dancers a rest, appetizers, dinner and dessert were served throughout the evening.

A nostalgic portrayal of the atmosphere of days gone by was generated by a unique blend of sights and sounds of that period. Making history live and remaining to be active in promoting Civil War re-enacting, the 30th Indiana carried on a valuable tradition for remembering and celebrating an important part of our history.