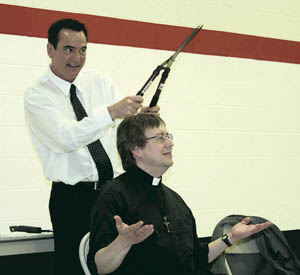 “You Can Lend A Hand” campaign, sponsored by Quality Dining Inc., is an integral part of Catholic schools’ fundraising efforts in the Diocese of Fort Wayne, South Bend.

Students from St. Therese Catholic School in Waynedale were one of those schools busy selling the coupon books through February of 2011. The books contained coupons for Burger King and Chili’s restaurants along with a few other offers from various local sports venues such as the Fort Wayne Komets, Fort Wayne Mad Ants and the Lutheran Health SportsCenter. The coupon books were sold for $3 and contained up to $95 in offers.

This year the Burger King coupon sellers won an extra bonus. According to the Principal’s Corner in the St. Therese church bulletin, “If all booklets are sold and money is turned in before February 28th Father Dave and I will be getting all of our hair cut off…” wrote Principal Grimm.

The two honored guests entered the school gymnasium on Friday, March 18 and took a seat in the barber chair as the student body cheered. Then they booed as Father Dave held up a framed image of Justin Bieber with his infamous side-swept swoosh bangs.

Principal Grimm began, “This is the moment you’ve all been waiting for. By the way, this is the longest my hair has been for a long time!”
He continued, “I’ve been getting questions all week…like, “How short will your hair be?” “Will we be able to wax your head?” And then, he said a student scared him when he was told, “I knew someone once that had all his hair cut off—it never grew back!”

Father Dave was first on the cutting block. He asked the students, “Is it gonna hurt?”

As Jeff Hey from the Hair Barn began he held up a pair of pruning sheers for trimming trees. The crowd laughed, then proceeded to chant, “Mohawk, Mohawk!”

Jeff told the two hairstylists, Kaitlyn and Alicia, “If you make a mistake… it’s okay!”

When it was Principal Grimm’s turn to sit in the barber chair the student body yelled, “Take it off!” And as the principal’s haircut was nearly finished the crowd started to chant, “Save the beard! Save the beard!”

Principal Grimm thanked the students for their hard work at selling the coupon books, then asked if it was all right if they dismissed early. It was a unanimous, “Yes!”

The school’s goal was to raise $2500, as that is what their profit was if all the booklets were sold. The students raised $2681.50. St. Therese School will use the profits from the fundraiser for improvements to classrooms.