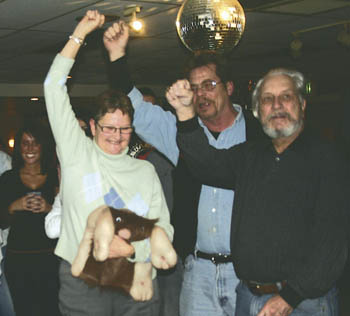 As some of our troops return from duty in the Middle East and Afghanistan, Air National Guard soldier Linda Becker deploys for six months.

Senior Master Sergeant Becker joined the United States Air Force in October 1973, and enlisted in the Indiana Air National Guard in March 1977. She has deployed to Kuwait twice, Oman and Afghanistan and she also deployed to Mississippi in support of the humanitarian effort after Hurricane Katrina.

Serving her country for her most recent assignment, Linda’s mission will be to give support to ground troops while serving as superintendent of Community Services Flight.

The military installation where Becker will be stationed is Qatar. This is a major transfer point for U. S. troops rotating in and out of the Middle East.
Linda will be the senior NCO (non-commissioned officer) in services with perhaps 200 American service folks under her leadership.

The installation in Qatar can have up to 10,000 U.S. troops at any given time. Senior Master Sergeant Becker’s day-to-day operations will include possibly 12-18 hour shifts with a day off every few weeks. She will be running a dining facility and NCO club, as well as, responsible for housing, and developing a physical training program. Her favorite part of this assignment will be what comes from her heart-her love of music. She will be entertaining the troops as a DJ and playing Karaoke on the base.

Qatar is a country near Saudi Arabia and is located on the Persian Gulf. It is a Muslim country, but unlike most of the conservative Muslim countries you can find Western culture, like restaurants and hotels. Everyone in Qatar speaks English.

One good thing, it is a no-fly zone, with a plethora of security. Rumor has it they call Qatar-Camp Cupcake. It has most of the pleasures of home-pool, movie, gym, massages and bar.

The greatest risk will be limited natural fresh water, which is tough especially when the summer temperatures can soar to 130 plus degrees, which is when Linda will be there. Haze, dust storms and sandstorms are also common.
On Friday, March 18, 2011 American Legion Post #241 friends and family sent Linda off in style. Biff and the Cruisers was the featured band of the evening. Cake and ice cream were just some of the treats.
We are here for support, and to say, “Thank you for all you do!” said Post Commander Ken Holloway.

Surrounded by a younger generation of soldiers, Linda showed off her tattoo. It is the familiar image of a gal with a bandana on her head, her sleeve rolled up, showing her flexed-bicep, with the catchphrase that says, “Let’s roll!”
I asked Linda what she will miss when she’s gone and she said, “I will be missing my grandson’s graduation, my 30th wedding anniversary, Waynedale Memorial Day parade, just to mention a few.”

“More than she knows we will miss her,” active-duty soldiers Natalie, Crystal, Laura, Ben and Ming all resounded throughout the exhilarating evening. “Working with Linda on base… her leadership is great!” “She is a perfect role model.” “If there is any trouble, she’s got your back.”

As an officer in the Air Guard, Linda has developed leadership skills above and beyond any civilian. Earning her place among the finest defenders Becker recently received a national award as Senior NCO of the Year. She has also been awarded the U. S. Air Force Commendation Medal that is one of the very highest “non-combat” medals given along with numerous other accomplishments.

Ming, a firefighter/EMT by day, dining hall superintendent at the base, talked of Linda not only as the perfect role model, but as a mentor. “Our unit has the highest moral on base and that’s because of Linda’s leadership,” Ming said, “Frankly, we are all a bit scared. We are losing our invincible leader.”
Going the extra mile for our freedom, Linda deployed on Wednesday from BaerField to start her new mission.