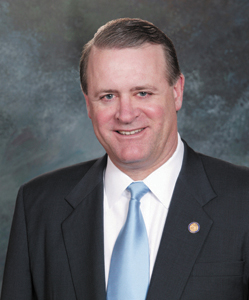 Stay the course.
That was the theme of President Ronald Reagan’s second inaugural address and the message echoed by an overwhelming majority of respondents in my 2011 Senate District 16 Legislative Survey. Coincidentally, the survey results came to me in the same week Americans and Hoosiers began celebrating the 100th anniversary of our 40th president’s birth.

Where government spending is concerned, 82 percent said they supported a state budget that limits spending to projected revenue without a general tax increase. Hoosiers should be glad to know from the Governor’s office to caucus leaders in both chambers and both parties, the call for no tax increases continues to resonate loud and clear.

Job creation continues to be high on the priority lists of area Hoosiers as well. While government doesn’t create jobs, government frugality and limited intervention can encourage investment and entrepreneurship. State leaders must remain committed to helping Indiana recover from the national recession faster and better than the competition. Legislation fostering an improved job-creation environment also got high marks in our local survey:
•Nearly 87 percent supported changing Indiana’s corporate tax laws to remain competitive with other states and encourage more business investment and development;
•Nearly 85 percent supported the state’s use of rewards for jobs created rather than incentives for jobs promised by expanding and relocating employers;
•A total of 77 percent supported focusing the state’s economic development efforts more on specific business sectors for which Indiana has comparative advantages; and
•A total of 77 percent supported utilizing and focusing research at state-funded universities to foster business development and job creation.

Allen County residents also want legislators to craft a state budget that prioritizes education but within the parameters of current economic times. Nearly 75 percent said they support the idea of flat-lining school funding at current levels if need be to balance the budget without tax increases. In a different question, only 35 percent supported the idea of a statewide tax increase to provide additional education funding.
Yet, there were high expectations for education reform reflected in the online survey:
•81 percent supported holding principals accountable for conducting annual performance evaluations of teachers;
•79 percent supported rewarding quality teachers based on performance evaluations rather than seniority or earned degrees.
•70 percent supported providing students in failing schools with parent-approved options to attend other public and non-public schools; and
•69 percent supported annual teacher evaluations by local principals based on an agreed-to statewide criteria;
There was also majority support to reduce overlapping layers of local government: By a 58 to 32 percent margin, respondents supported legislation abolishing township advisory boards and requiring township budgets to be approved instead by county councils.

Even the legislative survey itself was a symbol of Senate Republicans’ fiscal restraint and consistent with Reagan’s constant mantra that one tax dollar wasted is one too many. For a fifth consecutive year, Senate GOP colleagues and I saved hard-earned taxpayer money by limiting the number and size of our direct mail pieces and depending more and more on e-newsletters and online surveys.

Senate Republicans appreciate everyone who participates in these surveys. They are very helpful to us as the legislative session progresses.

Those who have not yet responded to our online questionnaire may still do so by visiting www.in.gov/Senator.Long and clicking on 2011 Legislative Survey.