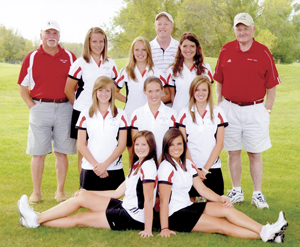 With the dropping temperatures, the leaves changing color and falling delicately to the ground, the Bishop Luers girls’ golf season came to a bittersweet end. As two of the seniors from the team, we will greatly miss calling ourselves Lady Knight Golfers. Nothing could compare to the experiences we shared throughout the four seasons under the instruction and guidance of our coach, Tom O’Brien.
As a team, we bonded and created countless memories we will never forget. We learned that we can accomplish anything if we put our minds to it, with the repeated phrase from our coach tucked in the back of our minds. He said, “Whether you think you can or you think you can’t, you’re right both times.” Indeed, this positive and determined attitude helped the varsity team to have a successful season with an overall season record of 8-4, and 5-1 record in their conference.
In fact, all four seniors placed in the top fifteen in the SAC tournament. The team also placed seventh in sectionals, and tried their best. For the third place qualifier for regionals, there was a five-way tie. Seniors Alex Eagleson and Amanda Vankoski were two of the five who competed in the play-off. Senior Amanda Vankoski won the playoff and advanced to Regionals, and the team came to watch and support her.
Similar to previous years, Brookwood generously hosted the banquet for the team. This year delicious foods, such as chicken, lasagna, and pies, were served. The banquet was also filled with the distribution of various awards and the recognition of every player, both JV and Varsity. The Varsity team for this year included Alexis Baker, Libby Devlin, Alex Eagleson, Lexie Hamel, Michaela O’Shaughnessy and Amanda Vankoski. Collectively, they received many honors and awards.
First, seniors Alexis Baker and Amanda Vankoski received honorable mention for Academic All-State. They both also won the Most Improved Player Award. In addition, Baker won the Mental Attitude Award. Vankoski received the Golfer of the Year Award. She also made All-Conference along with fellow teammate, senior Alex Eagleson. Eagleson won the Golfer of the Year Award as well. The award for Putter of the Year was given to senior Lexie Hamel and Most Improved Putter was junior Libby Devlin.
Furthermore, the JV team was comprised of Samantha Rahrig, Madeline Brown, Elizabeth Baker, Kaitlyn Andorfer, Alysa Raugh, Megan Hanke, Heather Hanke, and Georgia Gladding. They also had a very strong season.
At the banquet, Junior Samantha Rahrig obtained award for Most Improved Putter. Junior Georgia Gladding was the JV tournament champion. Additionally, Sophomore Megan Hanke received the Golfer of the Year Award for the JV team, and the winner of the Most Improved Award was Alysa Raugh. Lastly, Madeline Brown won the Rookie of the Year award.
Laughter, a senior picture slideshow, and good conversation ended our evening.
Several awards were distributed to the players at the banquet. However, the coaches did not receive any special awards but we would like to thank them for all their hard work. Head coach Tom O’Brien, Steve Gille, Augie Segyde and John Matera thank you for your time and patience throughout the year.