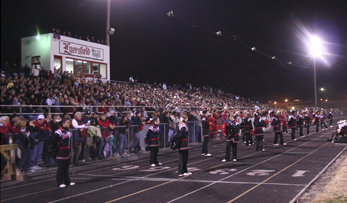 There was a football game Friday night on the edge of Waynedale that had significant matters on the Summit Athletic Conference record book and regular season championship. As the undefeated Bishop Luers and Bishop Dwenger geared up for battle, October 15, 2010 on the gridiron, the scene that unfolded off Luers Field Friday night was one of wonder and awe.

The crisp fall night was pierced by the commotion of an astonishing amount of people. As the clock turned to 5:45pm, a full hour and fifteen minutes before the actual kickoff, the stands, spare bleachers brought in, and fences surrounding the field were all filled. By 6:30pm, cars were parked in every nook and cranny available around the high school. Grass behaved as blacktop, and Southgate Plaza acted as an extension of the “parking lot.” Even as the game neared kick off, many were still filing in. Around 6,000 pre-sale tickets were sold and with normal ticket booth sales the crowd was estimated at over 8,000.

In addition to the masses, there were some special guests in attendance as well. Former Bishop of the Fort Wayne – South Bend diocese, Emeritus John D’Arcy was present to witness his 25th “Battle of the Bishops.” Furthermore, members of the Indianapolis Colts Cheerleaders were in attendance as well, promoting their strong connection with Indiana communities providing autographs and pictures. As part of the 2010 Friday Night Football Tour, The Indianapolis Colts also provided a  donation to the home team’s football and cheerleading programs for the continuation of excellent  performance.

With all the spectacular commotion off the field, when 7pm finally came around, many individuals from Waynedale, Fort Wayne, and even Northern Indiana were ready to see the action on the field. Dwenger, having not lost in the conference in over four years, got off to a strong start. They forced Bishop Luers to an early three and out. On their first offensive possession, running backs Remound Wright and Jalen West established the run game. Just as Dwenger was going to take the lead, the long drive was halted by a massive goal line stand. Luers took the defensive momentum and transferred it to their potent offense. The Knights took the ball on a lengthy drive themselves and eventually scored via a fantastic pass from Quarterback James Knapke to Kenny Mullen. Early in second quarter, the score was Bishop Luers 7, Bishop Dwenger 0, could this be an upset for the ages?

Running backs Remound Wright and Jalen West had other ideas when it came to a Bishop Luers upset bid. The Saints received the kickoff and scored immediately. The drive lasted only two plays and was capped by a strong run by Stanford-bound Remound Wright.

With the score tied at 7, the Saints never looked back. After another quick three and out by the Knights, Dwenger scored once more with a run by Jalen West midway through the second quarter. Now trailing 14 – 7, the Knights needed an answer and fast. Luers put together a decent string of plays, then a critical tipped pass led to an interception at midfield. Dwenger took over possession and then converted on a key fourth down at Luers’ 40-yard line with less than a minute in the 2nd quarter.

As the second half started, Bishop Luers battled to stay in the game and they did. However, they never made up any ground either. Bishop Dwenger went on to win the annual “Battle of Bishops” game 36 – 14, but the night itself overshadowed the action on the field. It was truly a magical evening on the edge of Waynedale that will be remembered for a long while.

As the Indiana High School Football playoffs begin next week, The Waynedale News would personally like to wish Bishop Luers and Bishop Dwenger the best of luck as they each compete in their respective classes.