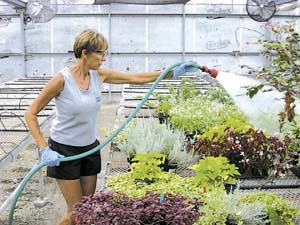 Many of Fort Wayne’s most exotic plants are grown right in the heart of the city thanks to the local growers at the Lawton Park Greenhouse. Visitors to Lawton Park have most likely seen the greenhouses, a trio of large white structures lined up neatly in a row. There is a rich history to this place, which has been around since the 1920s and boasts an original glass house from 1925 that is still in use. Ever since that long-ago time, the Lawton Park Greenhouse has been vital to the Fort Wayne park system by supplying plants and flowers throughout the year. While the citizens of Fort Wayne may not be aware of the role that Lawton plays in beautifying the city, evidence of the facility’s efforts can be found all around, from the popular showcase garden exhibits at the Foellinger-Freimann Botanical Conservatory to Foster Park, one of the city’s most notable gardens.

The showcase garden at the Botanical Conservatory changes four times a year and creates a unique experience for visitors. The current exhibit is the Greek Garden which features diverse plants such as winding grapevines, fragrant herbs, and sweet figs. For this exhibit, the garden is divided into small rooms by shade creating walls, and it also contains a water feature. The effect is calming and cooling like an early morning breeze blowing in from the Mediterranean. The garden also features an eight-foot tall Trojan horse that kids can climb in by ladder and exit by slide, as well as ruins made from salvaged material.

Mitch Sheppard, manager of the Conservatory, says the Greek Garden is “beautiful and tranquil and looks ancient but is actually brand new.”

According to Sheppard, while a lot of planning goes into creating a unique and interactive experience for visitors, the most difficult part of a showcase garden is ordering massive amounts of plants. And whenever plants are needed, Lawton Park Greenhouse is sure to be involved. The Conservatory gets their plants from Lawton instead of a commercial grower because they have access to special orders from the Lawton Greenhouse

“If someone wants three pink hibiscuses, we can do that,” Lynda Heavrin, Manager of Landscape and Horticulture, states. As a case in point, the Conservatory tries to have one or two new poinsettias during the holidays that haven’t been available to the general public for more than a year.

The process of ordering and growing plants certainly isn’t for the impatient. Heavrin says that the plants for the winter show at the Conservatory are a thirty-six week crop and need to be ordered by the end of February. They purchase bulbs for the spring show in October and put them in a cooler that’s just above freezing to create a fake winter. Plants for the summer show can take anywhere from three to twenty-four weeks to grow. Heavrin says it’s fun to grow such a variety of plants and do new things for the showcases; in the Conservatory’s upcoming “Candy Land” holiday display, she’s growing bronze sweet potato vines for a chocolate swamp. However, she added that working with plants can be a challenge. Cold or cloudy and rainy weather can still affect how well the plants do, and sometimes a crop can fail, which has taught Heavrin that flexibility is a valuable asset in her line of work.

Visitors to one of Fort Wayne’s most popular parks, Foster Park, may not realize that the same amount of work goes into creating a beautiful visual experience for them also. Fort Wayne hasn’t slouched on the landscaping for Foster Park since it was acquired in 1912, although a lot has changed. The original gardens consisted of a variety of irises and peonies and a water garden with water lilies; Lawton now grows 150 different types of plants for the park. The colorful flowerbeds that draw so many visitors each year are traditional to Foster, and the designs have been passed down from gardener to gardener for the last few decades. The gardens are an eclectic mix of formal flowerbeds that have distinct areas with specific plants and the more carefree “cottage garden” flowerbeds that feature several different flowers and have no apparent pattern. The species of plants vary from classics like marigolds and petunias to plants that are a little more unusual such as alocasia, a broad leafy tropical also known as elephant ear, and butterfly weed, a flowering plant that, of course, attracts butterflies.

It may seem hard to believe, but planning has already started for next year’s flowerbeds at Foster. Some of the plants are taken out of the gardens before the first frost (which can happen in September) and replanted at Lawton for the next year. Plants that are taken from cuttings may be started as early as December, so maintaining the flowerbeds is truly a year-long job.

When Mitch Sheppard observes the plant-growing process, she sees an interesting cross between factory-like production and an artist’s touch. There is a strict procedure that has to be followed that includes starting the plants, some of which are planted by hand as seeds; staying on schedule with the plants so they’re ready for the parks, Botanical Conservatory, and plant sales; transplanting them multiple times as they grow; and watering them as many as two or three times a day with acid-injected water to control the PH level. On the opposite end of the spectrum, the side that is less mechanical and more creative, the grower puts their soul into nurturing the plants, and yes, many even talk to the plants to help them grow.

Staff at the Lawton Park Greenhouse take the business of growing plants very seriously, and the citizens of Fort Wayne are the ones who reap the benefits from all their hard work. Whether strolling through a magnificent floral display at Foster Park or checking out the latest showcase garden at the Botanical Conservatory, the beautiful sights wouldn’t have been possible without the caring hands of the growers at Lawton Park.