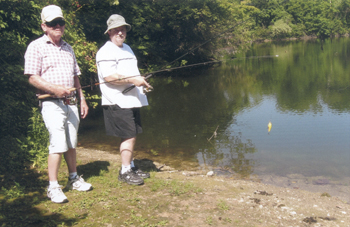 One of numerous awards. RECOMMENDATION: It is recommended that the Board recognize FWCS schools with the highest-ranking Scores on inspections of building maintenance and cleanliness for the 2008-09 school year.

RELATED INFORMATION: Ensuring high standards of cleanliness and maintenance of FWCS buildings and grounds is a top priority for the Maintenance and Operations Department. Supervisors complete two random inspections during the year to keep custodial staff and principals informed about the condition of their buildings. Schools were ranked as Gold Standard, Silver Standard or Bronze Standard, depending on their scores. This past year 19 schools earned the Gold Standard award. We congratulate them on the hard work and dedication to keeping learning environments at such a high level of cleanliness.

One of those awards went to Waynedale Elementary School, Dennis Taylor, Custodial Engineer.

That was then and this is now.

As I drove to meet Dennis Taylor for this interview, I knew a few facts; I knew that he had been given numerous honors by the Fort Wayne Community School System for excellence in service.

He was 61 and retiring from the job he held for 39 years as a custodian with the Fort Wayne Community Schools.

After reading Mr. Taylor’s message, the wheels in my head started to churn and silently prayed that the medical conditions he had acquired during his 39 years as a custodian did not worsen before he could get health insurance for his wife and himself. Yes, he was offered Cobra, but he can’t afford it. He had hoped to work until the age of 62. At that age he could access some of his retirement benefits without a penalty.

Why did you decide to leave or “retire” I inquired? Mr. Taylor informed me that the boss of the new company, Sodexo, the company outsourced for custodial services, made it clear that you had to work fast or you wouldn’t last. For a man who worked on Saturdays and Sundays, at no cost to the school, to ensure that his school was impeccable clean and orderly, he knew that fast and well done were not always synonymous in custodial work at an elementary school. And then the second blow, his pay would be cut from about $16.00 per hour with great health benefits to 5 or 6 dollars per hour with fewer benefits. It is fair to note that Sodexo has some baggage and it may be well worth your time to look into it.

Ever generous in his words about others, he stated that he was grateful that Dr. Wendy Robinson had made the suggestion to keep the current custodians working the first shift for the sake of the children. The children at Waynedale Elementary know Mr. Taylor, he was there 27 years protecting them and cheerfully assuring a clean and safe environment for “his kids”.

But, Dr. Robinson’s good idea disappeared. Why, Mr. Taylor did not know. However, he was confused when Dr. Robinson encouraged the departing custodians not to seek unemployment benefits. I told Mr. Taylor, I hoped he had misunderstood her, he certainly seems like a candidate for unemployment.

It seemed like a compromise, and workable solution, to Mr. Taylor when the custodians suggested everyone at the Fort Wayne Community School take 1 to 2 percent reduction in pay and keep the custodian’s jobs. Someone with decision making powers didn’t agree with that idea. But why, Mr. Taylor didn’t know, nor did or do I.

In closing, the story of a hungry man who was given one fish to eat comes to mind: it goes something like this: If you see a hungry man/woman you may give him/her a fish, but you should also teach him/her  how to fish he/she will never be hungry again. Mr. Taylor learned to fish and he feels certain he and his wife will survive. But the tears in his eyes and his passion to tell this story were for all of the wonderful and dedicated people, 202 plus custodians, that were given a fish.

When I met this gentle giant of a man, he handed me a piece of paper with his story and a picture. I promised to pass it on to his friends and fellow custodians. Here are his thoughts:

AFTER 39 YEARS WITH FWCS I’M RETIRING

Well, they are actually outsourcing us custodians. Eventually there will be a whole bunch of people outsourced in the FWCS system and the closure of more schools. But instead of going with the outsourcing company, I’m retiring, besides I have bad feet, bad legs, a bad back and I’m 61 years old. So it’s time I step aside, get out of the way of progress and let someone else take over, that can do more at a faster pace.

I have gone through five principals in 27 years and most custodians cannot say, like I can, I have been blessed with all five. They left me alone and let me do my work. They never gave me any problems.

I was blessed to have a very good night man Leonard Jordan for 23 years, he was the best.

From my night man to the kitchen lady, Sharon Lundquist, to 98% of the teachers and teachers aids, to the secretaries, I have been blessed.

I have been blessed with the best health insurance by the school, now it will be dropped as I retire and I have been blessed to have one job in 39 years. Most people now a days go from one company to another. I have no hard feelings with what the school system did to me, it’s just the sign of the times, it’s all about money and money talks.

I’m 61 years old and it would have been nice to work until I was 62, at least until I got on Social Security, but oh well, it’s just a little bump in the road.

Now I put out my sign that says — Gone Fishing! and I will enjoy every minute!