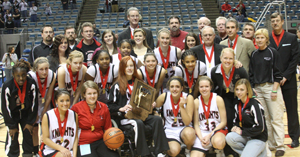 Poise under pressure makes a team.

And that is what the Bishop Luers Girls Basketball team is made of. Even with missed calls made by the officials, the Bishop Luers Lady Knights kept their cool and played a fair 2A State Championship game.

“They are all mentally tough and confident and that really showed on the court,” said Assistant Coach Tom O’Brien.

“We never expected to get this far. We were definitely the underdogs.”

“But we were the underdogs going into the Oakhill and Wabash games at Regional too. The Lady Knights were 10 points down at the start of the 4th quarter against Oakhill. Final score 48-45. And 3 points behind with 21 seconds left against Wabash. Winning with a score of 69-67.”

Coach Reiner said, “From that moment on we’ve been a different team.” Somebody asked me, ‘What did you say in the timeout to change it?’ Nothing. It’s the same thing I’ve been preaching, and the girls did it.”

“I mean that in a good way. The girls were poised.”

“I talk about possessions, patience and taking care of the ball, and just staying in the offense,” stated Coach Renier.

The girls really bought into the coaches pep talk.

“Stop trying to block shots! All that’ll get us in is foul trouble and free throws for our opponents.”

Result: Against mighty Oak Hill (one of Class 2A’s best teams), Luers held them to an unbelievable low total of only 3 free throws.

“Take care of the ball.”

Result: The Knights had only 11 turnovers against both Oak Hill and a fantastic Wabash squad. Then tied with only seconds to go in the 3rd quarter at Semi-State vs. Winamac. Luers was hot during 4th quarter bringing on a 57-44 victory.

“We are a lot more patient, and our offense is clicking because we were running it right,” said senior McKenzie Wyss.

From defense to offense, everyone on the team contributes.

Team players like Brierra Young, Miracle Woods and Brooke Ridley will have longer basketball futures, but senior teammates like Kristy Gerardot, Melissa Oberley, and Wyss were just as important to making the Knights effective. No one scores if the other players don’t do their jobs.

It was time to focus.

“We talked about making easy passes and getting into the offense, and we’ve done it,” Renier said. “We’re not that great of a passing team or a ball-handling team. Our offense is based on screens and movement because we have kids who get their shots off of screens.”

“I really think we’ve learned something since we started.”

Going into the State Final matchup on Saturday, March 6, 2010 the Austin Eagles had a 2000-point career scorer, 2-1000 point scorers and a career top rebounder for the history of the school. And, the state’s highest scoring team.

At the start the BLHS girls played with purpose, dominating the first quarter. Luers’ Brooke Ridley (forward) had 6 points and 3 rebounds as the Knights led 14-10.

The Knights fell short in the second quarter, despite their edge on rebounding 21-13. The first half ended with a score of Eagles 29, Knights 26.

The charge of the Knights stayed steady. Luers didn’t quit. They kept dominating the rebounds yet, the outcome was still in question, but it wasn’t enough.

Scoring 12 of her 17 team-high points, center Miracle Woods and her teammates led a furious Lady Knight comeback into the fourth quarter, and then into overtime.

With 38.8 seconds to go in regulation, outcome was still uncertain. The Eagle’s Katy McIntosh (senior guard) made a basket and drew a questionable foul, tying the game at 59, on the free throw.

Then the Lady Knights held for one last shot, a shot for the state championship. Brierra Young took a three pointer at the buzzer that was perfectly on target but just a couple inches long. It hit the back of the rim and bounced out, and with that, the momentum swung to the Eagles.

In overtime, Austin hit five of their six shots taking the lead with 2:32 remaining. Eagle’s McIntosh flew in with a layup for a 67-63 lead and they never looked back, capturing the schools first state title with a score 70-65.

This time next season, the Lady Knights Girls Basketball team should have more of their own to play with. The Lady Knights will be back. As their Victory Song claims, “Red and black our colors proudly flying, We are the Knights, we’ll conquer, never fear…” Just wait until next year.

But for now, the 2009-2010 season is over. The Luers Lady Knights attempted with poise to rock the Allen County Memorial Coliseum but the Eagles landed. Luers finished the season 18-8.

“What a bunch of fighters we have,” Coach Renier said. “It’s a shame we lost.”