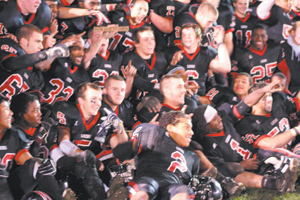 With a big smile on her face, Bishop Luers Principal Mary Keefer proudly handed the Class 2A Semi-State Championship award to the Knights on Friday, November 20 after their match-up with Rensselaer Central.

But that wasn’t the only win Luers received. They also came away with the most Semi-State Championships in IHSAA history. Twelve.

“It wasn’t just the 2009 team that did it. It was all the teams that have played and been a part of the Knights history,” said 23-year veteran Coach Matt Lindsay.
The Semi-State game on Friday night (52-21) put Luers in the 2A State Championship game. But it wasn’t the game played on Friday night against Rensselaer Central that got them there. It was the 54-53 (2 OT) game against Lewis Cass that made the difference. The game played a week ago.

There are three phases in a football game – offense, defense and special teams. Bishop Luers Knights brought out their best for the regional game against Lewis Cass, and much of that came from the special teams. The kicker(s) in particular-Alex and his younger brother, Sam. Without the extra points that Stronczek put on the board Luers wouldn’t have made it to state, non-the-less to semi-state.

These brothers put their heart and soul into their school. They started the school year as soccer players, pacing the sidelines during the football games. So, about mid-season Alex and Sam decided to join the struggling team, and play football, with one condition-that they could play both football and soccer. They came in as special team players.

There are some games when the stadium never gets louder than right when the opening kickoff flies through the air.

“You’ve got the first play of the game,” said Stronczek, “it’s an adrenaline rush.”

Everybody’s out there and that’s the first snap of the game. Everybody is pumped up.”

It’s exciting. You get to set the tempo of the game.”

With this kicker’s progress, his blockers have faith. And because there is speed, it is like power. If you have speed, you can take over a game real fast.
The Knights have speed.

On Friday night of the Semi-State game, the Knights came away with the first six possessions resulting in touchdowns.

At halftime Luers had 42 points. Rensselaer 7. “We’re not there yet,” said Coach Lindsey at halftime. “Don’t take your foot off the pedal.”

Luers brought in backups for the second half. Rensselaer still couldn’t adjust to Luers’ speed.

Freshman Sam Stronczek, Alex’s younger brother, kicked with 7:03 to go in the third quarter—it was up and good.

The Bombers were not slow or soft by any means. Luers was just a hard-nose, fast running team.

Quarterback James Knapke passed for 195 yards and three touchdowns, while running back Ken Mullen III showed his speed by blowing away Rensselaer with 156 yards rushing and four touchdowns.

And before the curtains dropped on the Bombers, Luers kicker Alex Stronczek drilled a 32-yard field goal early in the final period. Stronczek had his second straight consistent outing, as he connected on the field goal and each of his seven extra points helping the Knights win 52-21.

“P.H.D. is our formula. Pride, Hustle and Desire,” Mullen stated after the game.

The Knights may have 5 loses, but much of the success and seasoning of this team comes not only from the team players but also from the coaching staff and their experience. Many of the coaches come up from the ranks as playing for Luers a few years ago. Great players and now great coaches have assisted in building this team. Powerhouse people like Mike Egts, Lew Goodwin, Clancy Shank, Kyle Lindsay, Brent Egts, Matt Millhouse, Fred Moore, Steve Keefer, Lee Rodenbeck, Phil Talarico, Chris Charais, Mike Goodwin and Marc Cotter.

“We’re blessed with some great athletes,” said Head Coach and Athletic Director Coach Lindsay, “and they stay with us.”

One of the questions asked of Coach Lindsay on Tuesday morning (November 24th) before practice was, “What are you doing to prepare for this state championship game?”

“It’s like preparing for any other game—you look at films, go through game plays…today, we’ll be practicing at The Dome (Plex South) and practice tomorrow at Lucas Stadium. Then, game day.”

The Bishop Luers Knights are heading for Lucas Stadium to play Monrovia Bulldogs (14-0) on Friday, November 27 at 7:05pm for the 37th Annual State Tournament Series in Indianapolis.

Luers has seven 2A State Football Championship titles—let’s make it 8!