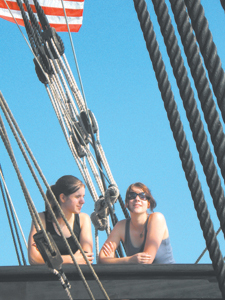 Any number of fascinating destinations lie within a four-hour radius of Fort Wayne. But how many of these interesting trips can also take you back in time more than 500 years?

Through the end of the month, this amazing opportunity exists, as detailed replicas of Christopher Columbus’ ships Niña and Pinta drop anchor at ports along the Ohio River.

Waynedale News carrier Dorothy Janovyak was on board last month, when the ships were docked at Michigan City. “They’re amazing,” she said afterward. “You can really imagine what it would have been like.”

That’s the power of these masterfully done reproductions. Standing on deck, it’s easy to envision life at sea, headed into unknown waters, crowded aboard with as many as 27 crew members. The detailed authenticity of the ships brings it all alive.

These floating museums, owned by the Columbus Foundation, tour regularly throughout North American waters, bringing the opportunity to see and feel the world of the past. Both ships were constructed without modern power tools, employing only tools and methods available in the Age of Exploration.

The dream of bringing this experience to the people began with the formation of the Columbus Foundation in 1986. Significant research led to the success of the Niña reproduction, deemed “the most authentic replica Columbus era ship ever built.” (Archaeology, January 1991)

Immediately after completion, the Niña set sail for Costa Rica, where she was used in the filming of Ridley Scott’s film 1492: Conquest of Paradise. Since then, she continues to tour annually, joined in 2005 by the newly built Pinta.

Despite the degree of sailing competence required, the volunteer crew seems in no danger of running short of skilled workers. Their love for the project shines through in every conversation. Some take part only once, others return year after year. Elenore Kaiser, now 82 and known aboard as “Miss Ellie”, has not missed a season since she began volunteering in 2000. “It keeps me young,” she laughs. “When I go for a check-up, my doctor looks at me and says, ‘What are you doing here?’ “

Though the ships are nearing the end of the 2009 touring season, Waynedale residents will find them within driving distance at two locations. From September 17 – 22, they’ll dock at the wharf in Louisville, KY. September 25 – October 4, they’ll be at B & B Riverboats, Covington, KY.

A visit to the Columbus Tall Ships would make a great family fall weekend, just in time for Columbus Day.