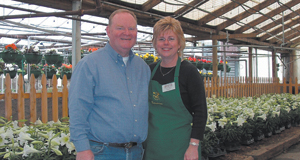 While researching for “facts” on the topic of Hardy Mums, I was caught by surprise to see that every article recommends planting these perennials in the spring. What’s so odd about this is that Hardy Mums are usually only available during the late summer and early fall. But then I figured out what they were talking about…spring is the time when you are supposed to divide your mums that wintered over from last year. It is also the time when we, in the business get and plant the cuttings to grow and have ready by late summer and early fall. The most important fact is that the Hardy Mums need to be planted in your yard at least six weeks before the first, hard killing frost which means you need to get the job done soon for best results.

Hardy Mums, also called Garden Mums are the perennial mums that will winter over and re-grow next spring. The other mums on the market, and usually the ones sold by florists are known as “Florist Quality” mums and are not hardy in cold climate areas. Hardy Mums should be planted in a well-drained soil, preferably in a sunny location (at least half a day) and can be moved to a “safe” place during the winter season. I used to plant my Hardy Mums in my flower beds after tearing out the annuals that were not doing so well and then, after the mums were finished flowering, I would “pop” them out of the ground and move them to my vegetable garden where I would winter them, propagate them, re-plant them  (back in the vegetable garden) and then, only when they were well budded would I move them back into the front flower beds. Sounds like a lot of work but hey, wasn’t it you who wanted to have gardening as a hobby?

Propagation should be done in late May or early June. Simply look at the ground where your plants were last year and you should see new growth coming up from the ground. Snap off the old, dead stems from last season and either let these plantlets grow or dig them up and divide them into clumps of one to three little plants. (Dividing your mums only needs to be done once every 2 to 3 years). Put them back into the ground allowing around 18” between each clump. After the stems grow to six inches in length, pinch off the tips so that your plant(s) will stay short and bushy. You can give your plants a second pinch 3 to 4 weeks later but try not to cut them anymore after the 4th of July. Mums are “photoperiodic” (much like the Christmas poinsettia) which means they are affected by light, including artificial light. Never plant your Hardy Mums in an area where there is an all-night security light or even near lights that are turned on by a motion sensor, as this minimal lighting will keep your mums from blooming.

Fertilizers are important during the beginning, growing stages, before and after pinching but stop fertilizing after the beginning of August. When winter arrives and the killing frosts destroy your mums, wait until after Thanksgiving to do any cutting back, and only cut off the spent blossoms allowing the stems to remain until May. It is a good idea to mulch your plants around Thanksgiving to protect the mums from a very cold and snow-less winter.