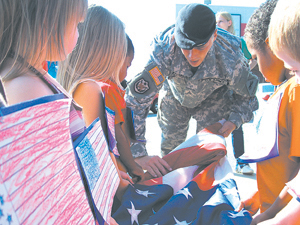 During times of turmoil and warfare throughout foreign countries, some good can still be found, lessons taught, and delightful stories told. A local soldier, and son of Judy Sheppard, Intergenerational Services Manager at Easter Seals Arc, has recently embarked on his second tour of duty overseas in Kirkuk, Iraq. Medical Sergeant David A. Sheppard has made several return trips home. However, he is always eager to share lessons that he has learned about the power of people with anyone who’s willing to listen.

This past July, Sergeant Sheppard came to Easter Seals Arc and taught the children enrolled at Stepping Stones Child Development Center the art of folding the American flag. To thank Sergeant Sheppard for his time the kids decided to gather nearly 100 Beanie Babies and send them to Iraq in an effort to keep the soldier’s spirits high. Little did they know they would become the suppliers of an international Beanie Baby operation that represents a friend, as opposed to foe.

Upon arrival after some 9 days and 7,000 miles, the Beanie Babies began their tour as a cushion for the soldiers in Sergeant Sheppard’s unit to provide a more ‘beanie’ feeling in case there was a need to hit the deck. Beanie Babies found themselves stuffed in pockets as well as knee and elbow pads and even in helmets. It wasn’t too long before they joined a higher rank and began keeping soldiers company in military Hummers and other heavy artillery vehicles, which paved the way for their next mission.

In many cases our American soldiers are having a hard time connecting with the residents of these foreign countries due to the simple fact that we are foreign to them. Trust is a factor for them, and vice versa. More often than not, the children are frightened by our soldiers. That’s where the Beanie Babies become a friendly gesture to the children by reducing their fear and animosity towards these American visitors, usually equipped with weapons, walking their streets.

Easter Seals Arc is asking for help to support Operation Beanie Baby. Please drop off any unwanted Beanie Babies (clean and in good condition) to Easter Seals Arc, located at 4919 Coldwater Road in Fort Wayne, Indiana, so that they can be packaged and sent to Sergeant Sheppard.

Easter Seals Arc of Northeast Indiana’s mission is to create solutions that change lives of children and adults with disabilities or other special needs and their families.  We provide a wide range of excellent services that nurture independence based on each individual’s goals and choices while providing advocacy and promoting community inclusion.