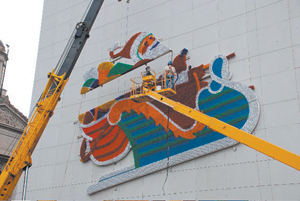 In the 28 years since its revival at Fort Wayne National Bank, the Santa light display has reestablished its status as a community treasure. In a December 2007 article in the Fort Wayne Journal Gazette, a call was made for additional helpers for Santa and his reindeer. Now, Santa has found his helpers. The English, Bonter, Mitchell Foundation announced it has stepped forward to assume responsibility for the display and to support the volunteer efforts of many other organizations, including National City Bank, the International Brotherhood of Electrical Workers Local 305, Shambaugh and Son and Do it Best Corp. In addition, to celebrate this new beginning, the Foundation announced that Santa is “going green” with new environmentally-friendly LED bulbs.

When National City acquired Fort Wayne National Bank in 1998, it took on the considerable annual expense of Santa and his reindeer. National City intends to continue to host the display and play an important role of sponsorship and promotion.

Michael Eikenberry, President of National City’s Fort Wayne offices, welcomes the new arrangement. “We believe that Santa truly belongs to the Fort Wayne community,” said Eikenberry. “Generations of children have marveled at the Santa since its debut at the Wolf & Dessauer department store in 1940. We all want it to remain part of Fort Wayne’s holiday tradition for generations to come.”

The English, Bonter, Mitchell Foundation has made a commitment to the preservation of the display and is taking the first major step in ensuring its long-term viability. Thanks to a grant from the Foundation, work will begin on November 10 to convert Santa’s 24,717 incandescent light bulbs to energy-efficient LED bulbs.

The labor of replacing the bulbs is being donated by IBEW Local 305 and apprentices of the Fort Wayne Electrical Joint Apprentice Training Committee. Shambaugh and Son, which is assuming responsibility for ongoing maintenance of Santa and his reindeer, will oversee the project which will take place in the parking lot north of National City Bank. “We estimate that it will take 400 hours to convert all the bulbs,” said Joe Langmeyer, Business Representative of Local 305. “Our goal is a bulb per minute.”

By replacing the current 11-watt bulbs with 1-watt LED bulbs, Santa will use 90 percent less power while providing a brighter display. The old bulbs lasted just 2,000 hours, while the LED bulbs are expected to last approximately 80,000 hours. Under optimum conditions, the new bulbs could remain in place for 177 holiday seasons.

“The LED bulbs have a hard plastic covering and are more durable than the current incandescent bulbs,” said Greg Finner, project manager from Shambaugh and Son, “so we expect much less breakage each year during assembly and disassembly.” Plans are being developed for the old bulbs to be turned into commemorative ornaments and sold to benefit local charities.

Santa’s “helpers” also include Martin Inc. which handles the installation of the display and Do it Best Corp. which donates storage space that houses Santa the rest of the year.

The annual lighting of Santa is a centerpiece of the Downtown Improvement District’s holiday activities, and many businesses benefit from the thousands of visitors who attend the event.

DeeAnn Lengerich of Camelot Carriage Rides, one of Fort Wayne’s three carriage companies, has a unique vantage point, with Santa being her most popular destination. “We do 8 to 12 rides each evening, seven days a week, during the holidays,” she said. “We’ve had countless wedding proposals in front of Santa, and many families return each year as part of their holiday celebration.”

This year, thanks to the generosity of the English, Bonter, Mitchell Foundation, National City, IBEW Local 350, Shambaugh and Son, and many others, kids from age 1 to 99 will be able to bundle up, hold on to their hot chocolate and enjoy the brightest Santa ever.

•Santa and his reindeer made its historical debut on the Wolf & Dessauer department store on Thanksgiving Eve, November 20, 1940.

•At that time, it was considered the second largest display of its kind in the country.

•In February 1959, Wolf & Dessauer moved to a new location and the Santa began 20 years in storage.

•In 1979, Jim Green, a GTE phone installer, discovered Santa in disrepair in an old warehouse.

•On Thanksgiving Eve, November 27, 1980, the lighting ceremony took place for the restored Santa and his reindeer on the Fort Wayne National Bank building.

•On November 10, 2008 work began to replace the 11-watt bulbs with brighter, 1-watt LED bulbs that use 90 percent less electricity.

•The English, Bonter, Mitchell Foundation is assuming responsibility for the preservation of the Santa display.

•National City will continue to host and sponsor the display.

•Do it Best Corp. is donating storage space throughout the year.