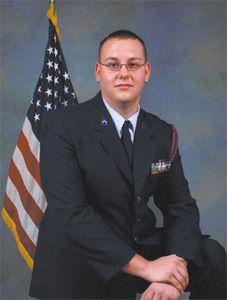 Joe Wilhelm is a senior at Wayne High School and has been involved in numerous activities, including:  Statistician for the varsity baseball team, National Honors Society, Fort Wayne Community Schools Superintendent’s Student Advisory Council, and Youth Leadership Fort Wayne to name a few. The activity that has been the most beneficial to him has been his four year involvement in the Air Force Junior ROTC Program. Through ROTC, and other activities, he has been involved in hundreds of hours of community service and the chance to help others has been a major encouragement. In ROTC, he holds the highest cadet rank possible, cadet Lieutenant Colonel (c/Lt Col), and serves as the Special Assistant to the Senior Aerospace Science Instructor. As far as academics, he is 3rd in his graduating class of 250. Joe has been accepted to Purdue University West Lafayette into the First Year Engineering Program. He plans to study Aerospace Engineering and attain a Bachelor’s Degree.

Joe received the Daughters of the American Revolution Good Citizens Award and was the winner for the Mary Penrose Wayne Chapter of the DAR. This award is given to students who display the qualities of good citizenship. He was nominated to represent Wayne High School and had to submit a two-part application. The first part was an actual application that entailed basic information about himself and also questions as to how to display the 4 qualities of dependability, service, leadership, and patriotism. The second part of the process was the essay. He was given a topic, “Preserving our American Heritage” and he had two hours to develop and write an essay on the topic with no help from any resources. As the winner, he was awarded a certificate, a scholarship for $500.00, and an invitation to the state competition to be held in May.

Following is a copy of Joe’s essay as it was written for the competition:

The year is 1776. It is 100 degrees in the cramped room of Independence Hall. Delegates from near and far have come together to unite against oppression and sign the most revolutionary document in history. This significant document is the Declaration of Independence and it laid the framework for the United States of America. As citizens of this great nation, we have the honor and the privilege of preserving our American heritage.

What is American Heritage? When most people think of heritage, they think of history, but it’s much more than that. American heritage entails not only American history, but also American ideals, customs, and the American Way. These are all concepts that we, as citizens, must embrace and pass on to future generations. If we fail, this great nation falls to a mere shadow of its once glorious self. This is why it is our duty, as Americans, to preserve our American heritage.

Perhaps the most important way to preserve our American heritage is to exercise our right to vote. Our right to vote is one of our most significant responsibilities. This country came into being because of despotism and oppression. The framers of The Constitution took this into account and built in a system of safeguards to prevent the United States from falling to the same fate. One of these protections is the right to vote. If we fail to voice our opinions in an election, we give up our right to have a say in the way our country is run. Voting is only one option when it comes to preserving our American heritage.

Another way to preserve our American heritage is to show just patriotism. Contemporary society is not as patriotic as those of the past. Many people don’t agree with the war we are currently fighting. The Constitution gives them the right to feel this way. But no one has the right to diminish the valiant efforts of our men in uniform, fighting to give these people the right to voice their opinions. It makes no difference what you think about the war, the soldiers fighting it deserve your whole-hearted support. But it’s not just supporting our troops, being patriotic is supporting our country. Patriotism can go a long way towards preserving our American heritage, but it can’t preserve it forever.

In order to ensure continued preservation of our American heritage, we must teach our children and grandchildren what it means to be an American. In today’s society, American values are at an all time low. The general public is more concerned with themselves than they are their nation. We must instill a sense of nationalism in younger citizens in order to combat this growing problem. We must teach them the significance of being a citizen of this great nation. Then they can carry on our American heritage and pass it on for generations to come, enabling our values to survive long after we are gone. Without ensuring younger generations understand the importance of American heritage, it is destined to be lost in time.

Whether by voting, showing patriotism, or passing on values to younger generations, our duty as American citizens is to preserve our American heritage. We must ensure that the “American Way” lives on throughout history, and for generations to come, the world knows what makes America the greatest nation in the world!