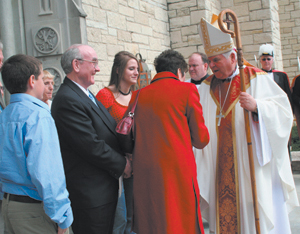 In the incensed air of the Cathedral of the Immaculate Conception, there was an air of respect, honor and praise on Sunday, April 15, 2007. With the Holy Sacrifice of the Mass, held at 2:30pm, Bishop John D’Arcy celebrated 50 years of priesthood. The Fort Wayne-South Bend diocese, in its 150th year, also marks a milestone with the sesquicentennial Year of Jubilee.

Bishop D’Arcy spoke highly of the priesthood, choosing to honor on the occasion eighteen students of the cloth. In characteristic humility, he called the sacrifice of celibacy a privilege. The priest, familiar to the media, spoke openly about the trials the priesthood has undergone in recent history. He called the problems a time of purification and declared a new springtime for the church.

At 74, Bishop D’Arcy never skirts an issue. The priest is known for his ability to talk openly, whether in his weekly column in Today’s Catholic, or to students on one of his visits to the schools in his diocese, about current issues including The Vagina Monologues, the church’s treatment of homosexuals and immigration law.

Both collectively and personally, D’Arcy was recognized as a man of love for his people. The Bishop, originally from Boston, has served the diocese for 22 years. In recognition of the anniversary, he was presented with a wooden cross taken from the church in Boston where his parents, both Irish immigrants, were married in and buried at. The priest spoke with affection of his humble upbringing by parents who honored the God he has dedicated his life to serving.

Like his parents, the Bishop has dedicated much of his time and energy to the Catholic education of children and young adults. In honor of the anniversary, he asked for no gifts, but that donations would be made to the Catholic Education Fund to provide tuition and supplies for low income families. Kim Schumacker, 24, a Postulant of The Sisters of St. Francis of Perpetual Adoration, said, “His love for his children is so moving because you can tell he has taken his role as Bishop and Father to heart.” Schumacker, who attended both public and private schools, praised Bishop D’Arcy’s commitment to the Catholic education system. She said that, “It provides a foundation that you can always turn upon that is rock and not sand.” In tribute to the Bishop’s request, a collection of three thousand dollars was donated to the Catholic Education fund.

Following Sunday’s Mass, an estimated 1,000 members of the church and public attended the anniversary celebration at the Grand Wayne Center. There, Bishop D’Arcy and attendees were serenaded by students from Bishop Luers and Bishop Dwenger High Schools with traditional Irish hymns. Notre Dame Alumni praised his commitment to the local diocese and dedication to the church in times of hardship.

Representatives from the Hispanic Leadership Coalition of Northeast Indiana presented Bishop D’Arcy with a plaque, “from the heart of all Latinos,” thanking him for his work and charity. In accepting the plaque, the Bishop recounted when the Coalition contacted him requesting that he announce the Immigrant March last spring. The Bishop recalled his reply, “Tell them I will not only announce The March, I will walk beside them.”

Bishop John D’Arcy concluded the day with a speech characteristic of the love he gives those in his care everyday. “What I want is to love the flock that has been given me with the same great love a husband has for his wife.”