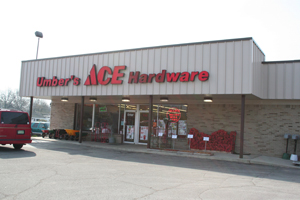 Tuesday, March 27th at 2:55p.m. a man brought two corn holders to the checkout clerk at the Ace Hardware on Lower Huntington Road. The man placed two dollars on the counter and when the cashier opened the register to give him his change, he grabbed $250 from the tens and twenties section of the cash drawer and bolted from the store.

The store manager heard her call for help and ran out the front door in hot pursuit. The cashier then pushed the intercom button and repeated her message which alerted Dave Umber, in the back of the store, that a robbery was in progress.

Dave said, “As soon as I heard the cry for help, I was on my cell phone calling 911 and also running out the back, trying to keep up with the store manager who was chasing after the van. I kept the police on the phone as I ran; trying to give a description of the van, the two men and the direction they were going.”

Dave saw a maroon, mini-van racing from the west side of the building into the alley that runs from the hardware store to Scotts Food store on Bluffton Road. The van proceeded down the alley but encountered rough terrain and stalled in Scotts parking lot. The two men first tried to restart the 1988 Chevy Astro van but when it wouldn’t start they exited the vehicle and continued to make their escape on foot. One of the men ran towards Pizza Hut and the other person exited the van and ran towards Waynedale Elementary School.

The 911 operator immediately posted the robbery on the radio, and realizing the direction one of the perpetrators was headed, ordered Waynedale School to be locked down.
The school responded to the emergency and took appropriate action, locking down the school. Kent Martz, Waynedale Elementary School principal said, “As a rule, the school doors are always locked anyway, but in a lock-down situation the teachers take further action for the protection of the students. The Fort Wayne City Police responded immediately. The Waynedale School area was cleared and secured and we were able to dismiss our students with a minimum amount of disturbance to the school.”

Dave Umber lost sight of his guy, but as luck would have it, an off-duty policeman was driving near the chase scene where the store manager was trying to keep up with the other guy. The policeman, Jason Brown, was alerted to the fleeing suspect. Brown caught up with him at the back of the Pizza Hut parking lot and ordered the man to the ground and made the arrest. The suspect dropped the money, which was still in his hand, and Brown cuffed him and called in the details to dispatch.

The suspect claimed he had just done $400 worth of crack cocaine and was experiencing chest pains. An ambulance was called to the scene and the suspect was identified as Hubert Ray Bryant from Huntington, Indiana. Mr. Bryant has had two previous arrests for robbery and had served 3.5 years for the previous convictions. He was arrested for felony theft. The suspect was taken back to the hardware store where he was positively identified as the thief.

The $250 dollars was recovered and is now in the possession of the police as evidence in the case. The accomplice has not yet been identified.

Dave said, “What was I thinking? What were we doing, chasing people that may be armed and dangerous? What if they would have turned on us, and start shooting? But it wasn’t a logical decision, just a reaction to the situation at hand. I felt while I was running after one of the men that there was support in the community. People were coming out of their shops or their houses, paying attention to what was going on and wanting to be of assistance.”

Umber’s Ace Hardware has been a part of the Waynedale community for sixty-five years. It was started by Dave’s grandfather, Lester Umber and this is the only time a robbery of this sort has occurred.