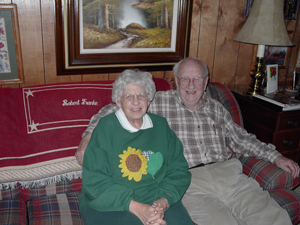 Bob Franke was born January 18, 1919 about a mile and a half east of Hoagland, on property his grandfather purchased. Bob grew up on this farm and when he was in high school he purchased his first vehicle. It was a stripped down, Model T flatbed. Bob said, “I paid five dollars for the old truck and there were two fuel tanks in it, one for gasoline and the other for kerosene. In the morning you would start it on gasoline and after it was warmed up, you slowly closed the gas valve and opened the kerosene valve. Gasoline was twelve gallons for a dollar and kerosene was cheaper than that. In order to be more economical you would do most of your driving on kerosene. When you were ready to shut down, you needed to shut off the kerosene valve, run the kero out of the carburetor and then switch back to gas for the next morning.”

Bob and his wife Mildred live on Nightfall Drive in Winterset Addition off of Winchester Road. He spoke expressively with his hands as he recounted the days of his early youth. His father was a farmer and had inherited the land near Hoagland from Bob’s grandfather who had come here from Germany in August of 1845. The ship they traveled on was the Copernicus and the old square-rigger had a manifest passenger list of 150.

The ship arrived in New York Harbor on August 1, 1845 and from there the Franke’s came west to the Fort Wayne area and purchased 40-acres of land near Hoagland for a sum of $95.00.

After graduating from high school, Bob’s first job was at Fort Wayne Tool and Die, located on Osage Street. His experience working on the old Model-T as well as farm equipment gave him the experience that qualified him for machine shop work.

The year was 1942 and America was involved in the war effort. Bob’s draft number was a low one, which meant that if the Selective Service called, he would probably be drafted into the infantry. He chose to enlist. He said, “I saw a billboard on the corner of Harrison and Baker Streets, advertising for people to join the Army Aviation Cadet School. They were in need of pilots and if you could pass the exam, you could join to be a pilot in spite of not having a college diploma.”

traveled to the newly constructed Baer Field and passed the exam that put him on his way to becoming an Army pilot. The draft board did indeed call not long after, but he was already in the service for his country. Bob boarded a troop train along with 350 other new enlistees and traveled four days to San Antonio, Texas. Of the 350 recruits on the train there were only five from this area that would become pilots.

Late in 1942 Bob began preflight school at Lakeland Air Force Base in San Antonio. The fail ratio was 30% but he made the cut and continued on. Classes lasted 9 weeks and he was tested in mental and mechanical aptitude. His next stop was Sweetwater, Texas for primary flight school.

The first airplane he flew was a PT-19 Fairchild. It was an open cockpit plane with a fixed landing gear. The instructor would sit in the back and yell into an air hose that was fitted to the student’s headgear. There was no self-starter, so before takeoff a mechanic would crank the flywheel to the proper RPM and the pilot would engage the six-cylinder engine. He was learning his trade when a change in orders brought the WASPS onto the base. The WASPS were a group of women pilots who were also needed in the war effort. The men were transferred to Stanford, Texas, as segregation was the rule.

Bob recounted a situation during one of his learning flights where the instructor told him to do a slow roll. The open cockpit trainer was a fly-by-stick, meaning, that a control stick was attached to the flight controls via a bolt in the floor and the stick was located between your legs in the cramped seating compartment. Bob rolled the PT-19 over towards an inverted position and as he felt the seatbelts tighten on his shoulders he heard a racket in the rear seat. As he became fully inverted, he looked back for the instructor, but the instructor was gone. Fighting off panic, he rolled the plane back to an upright position and started to circle, desperately looking for the open plume of a parachute. Finding none, he began circling back to the airfield when he heard the instructor talking to him through the air hose.

The instructor had reached down and unfastened the stick and then curled up in the cockpit, out of site. Bob said, “I’m not sure if that was part of the training, or if my instructor was just a practical joker, but it was high anxiety for a little while.”

After basic training he advanced to a BT-13. It had a fixed landing gear and a closed canopy. He was then transferred to Vicars, Texas for training in a 600h.p. AT-6 with a radial engine. It would do anything that a fighter plane would do and he would eventually accumulate over 600 hours in it.

Prior to Bob’s entry into the service he had met a pretty young girl at Bell’s Roller Rink back in Fort Wayne. The meeting had blossomed into a romance and in June of 1944 Bob came home and married Mildred Keltsch. He brought her back to Texas with him and together they made a home.

Bob remembered one day in particular at the base. Mildred had dropped him off in the morning and he told her he would give a sign from his aircraft when he was ready to be picked up. Mildred was sitting with a friend outside their home when Bob returned home from maneuvers. He came out of the sky at 10,000 feet, did a roll and then came down to just off the deck and flew by her and her friend at 500 miles per hour. She knew he was done with work and ready to be picked up.

By the time the war had ended in Germany, Bob had accepted a commission as a Lieutenant and was offered a chance to go to Japan or opt out and return home. He decided to return home.

When he came back to Fort Wayne, he took a job as a fireman and spent 20 years in the fire department. After retiring from the fire department he returned to tool and die work at Gildea Tool. After retiring the second time he became involved in woodworking and still stays active, Bob and Mildred have 4 children, Bruce, Dean, Janet and Stan. They have 8 grandchildren.

From the old farm near Hoagland to his present home in Winterset Addition, Bob and Mildred continue to share a life together, enjoying the day to day challenges of life after retirement.