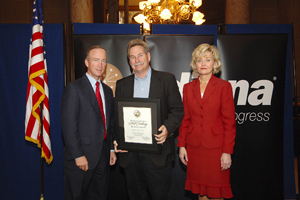 The letter from Mitch Daniels, Governor of the State of Indiana, read, “Congratulations! The Waynedale News has been selected as a Half Century Business Award winner for 2005. This prestigious award is given to companies that have operated in Indiana for 50 years or more while demonstrating a high level of community involvement.”

The Waynedale newspaper began on September 2, 1932, with Arden McCoy as the first editor. It was a single sheet measuring 15″ X 10″ and Nobel’s Home Store was the main advertiser. They listed Hershey Cocoanut, 1 pound for 17 cents and Camay Toilet Soap for 5 cents per bar. Potatoes were 7.5 cents a peck and 25 cents per bushel.

In a small corner of that first newspaper was a note from the local businessmen. It said, “This is the first edition of the Waynedale Press and is something to be quite beyond our fondest dreams. We wish the owner success and pledge our support morally, physically and financially.”

Arden McCoy, a former native of Iowa, first set up shop in his garage in the 6800 block of Old Trail Road. Every Monday, Arden with the help of his family, published the Waynedale Press. His sons Vic and Bob McCoy served as the paperboys, while daughters Vivian (McCoy) Shaffner, Phyllis (McCoy) Parrish and Iowa McCoy Stabler tapped out their journalistic and administrative talents. McCoy, in 1933, purchased an interurban rail car, located it behind what is now Umbers Hardware and moved the newspaper to its new expanded home.

Richard Kahlenbeck was the second owner and he renamed the publication The Herald. After Kahlenbeck, Jim Ransdell, publisher of the Roanoke Review and the Times Corner Suburban, purchased The Herald and in 1957 changed its name to The Waynedaler (which it is still affectionately called by most local Waynedalers). Jim Noble joined the staff at the Waynedaler in 1962 as advertising manager and for a while the small town newspaper was known as the Waynedaler-Suburban. In 1967 Noble changed the name to The Waynedale News and kept the publication alive for the next 19 years. Due to failing health Jim Noble published his last newspaper on January 16, 1986.

Robert L. Stark purchased the paper in January of 2000. He and the staff changed it from a black and white, 8-page tab-size paste-up, to a 16-page four-color broadsheet. Distribution jumped from 4,000 to 10,300 copies, with 19 carriers distributing to individual households and businesses throughout the southwest quadrant of Fort Wayne.

The Waynedale News continues to function with the care, dedication and hard work of Executive Editor Cindy Cornwell, Webmaster Alex Cornwell and Computer Consultant Rob Jackson. Articles contributed by local writers with topics typical to the southwest side of Fort Wayne keep the paper up-to-date and exciting.

Many thanks to Mary Brooks from Huntington, Indiana, who felt The Waynedale News would be a good candidate for the Governor’s Half Century Award. She dropped off the paperwork on August 30, 2005. And to Tom Hayhurst, Fourth District City Councilman, who nominated The Waynedale News for this award.

As it was in 1932 when local businessmen pledged their support to the community newspaper, so it is 73 years later, in 2005, as both the business people and the local residents contribute to keep The Waynedale News interesting and viable.