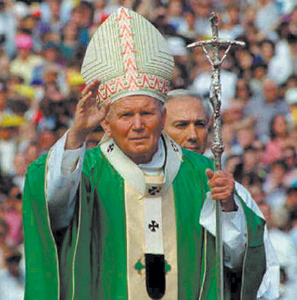 The Pope who embraced all of mankind

At this time, while we mourn and pray for the soul of Pope John Paul II, the successor of Peter, a beloved pastor and a Pope for the ages, I would like, above all, to thank God for giving to the Church and to the world such an extraordinary leader. We commend now his beautiful soul to God. I ask all in our diocese and all those who respect goodness and truth to join in prayer for his soul, and to pray for the Catholic Church at this historic moment.

Our Catholic diocese will now begin to live a time of prayer, faith and thanksgiving to God for giving us Pope John Paul II, the man from a faraway country, as he described himself on the lovely October night when he was elected to the papacy.

A MOMENT OF MEMORY

If I could be pardoned for a personal moment, I feel as if I have lost a dear friend and also a spiritual mentor and shepherd, a father and a magnificent example of the Office of Bishop.

I first met him in 1979 when he landed in Boston, coming from Ireland, on his first visit to this country. Before a quarter million people, mostly from universities and colleges, in that historic city, one could see the source of his extraordinary capacity to move young people. It was the fact that he challenged them with the story from the Scriptures about the rich young man. One could see that this would be a different kind of Pope. He said that early on he realized that it was the will of Providence that he should preach the Gospel while “walking down the roads of the world.”

A MAN OF PRAYER

I will remember him especially as a man of prayer. This was true his whole life. He spoke about spending long hours in prayer in beloved churches and cathedrals in Poland.

It is not an exaggeration to say that he has written on all the major areas which confront the Church. Family life. The identity of the priest. The gift of sexuality. The dignity of the human person. The true nature of freedom. Respect for human life. The place of religious instruction, or catechesis. The value of work. Catholic social teaching. The Splendor of Truth, which was a response to relativism. And so much more.

I saw him with youth in Denver, Toronto and Boston. He described it best himself. Imagine a Pope saying this: “As a young priest, I learned to love human love.” He writes, “Every where the Pope goes, he seeks out the young and the young seek him out. Actually, in truth, it is not the Pope who is being sought out at all the One being sought out is Christ. It is not true that the Pope brings the young from one end of the world to the other. It is they who bring him. Even though he is getting older they urge him to be young, they do not permit him to forget his experience, his discovery is youth and its great importance for the life of every man.”

In his very first day of the inauguration of his papal ministry on October 22, 1978, the Pope said to young people, “You are the hope of the Church and of the world. You are my hope.” He repeated these words often.

The Pope in his earliest days had a deep love and sensitivity for the Jewish people. In his earliest days, he visited a synagogue in Rome. He referred to the Jewish people as “our elder brothers.” Who can forget his visit to the scenes of the terrible Holocaust, the death camps. “No one is allowed to pass by here,” he said. Then his visit to Yad Veshem, the memorial of the Holocaust, a visit which stirred deeply the Jewish people in the whole world. His visit to the Wall of Prayer in Jerusalem where he placed a brief message. “At last, a Pope who knows what happened to us,” said one European Rabbi to an American Cardinal.

When has there been a Pope who wrote a letter, Ut unum sint, that they all may be one, in which he humbly raised the question of the Papal Office. “How can we without changing its fundamental value and its fundamental truth live it in such a way that it becomes a source of unity and not division.”

Everywhere he went, at every meeting, in every travel, he met with leaders of other Christian faiths.

If I can be pardoned a personal note, what means so much to me is the way he lived out his priestly vocation. Indeed, he always held a very strong sense of vocation. Beginning on the very first Holy Thursday, he wrote a Letter to Priests, and did so every year, even up to this year. Last week, we received his final Letter to Priests.

He gave to priests and to bishops an example of the real ideal of the priest, the Catholic priest in all his beauty. At a time of significant crisis in the Church, he saw the priesthood as a way of love and wrote the following remarkable words:

“The priest who welcomes the call to ministry is in a position to make this a loving choice, the result of which the Church and souls become his first interest, and with this concrete spirituality he becomes capable of loving the Universal Church and that part of it entrusted to him with the deep love of a husband for his wife.”

I asked him once at lunch with other bishops, “Do you have a message for our priests?” “Tell your priests that the great day for the Pope was not when he was made a bishop or pope but when he was ordained a priest and could say Mass for the people.”

I once said to him as we left his chapel after prayer, “You have helped us all to be better priests and bishops.” “Well,” he replied, “a Pope should be good for something.”

One of the promises you make when you become a bishop is communion with the Pope. It is a public promise. To strengthen it, we come to Rome every five years. This Pope saw this as central to his vocation in keeping with the request that Christ made to Peter to confirm the brothers; that is to confirm the other apostles. So, he did the following with every single bishop in the world.

A personal visit with the head of each diocese.

A luncheon with about 14 bishops.

A Mass celebrated together early in the morning in his personal chapel.

A talk, or allocution, on a particular pastoral question.

When he told Archbishop John Roach, at the time President of the United States Conference of Catholic Bishops, that this was his intention, the Archbishop said, “You will not be able to do that.” “I must,” he replied.

One cannot conclude without reference to his great veneration for Our Lady to whom he was always very close. He recounts this himself. Mary played a great part in his life. After his terrible shooting, he turned to her in prayer, returning to the Marian Shrine in Portugal, and placing the bullet taken from his body in her crown, symbolizing his belief that it was her who had protected him.

What can I say about the life of this man? He has lived through the great moments of his age. As a very young boy in his native country, he experienced the onslaught of communism. Then followed 40 years of communism.

After working in a quarry during the war, he studied for the priesthood in secret. He was ordained in November 1945.

He served the Church through Poland’s dark night of communism. He was a Father of the Second Vatican Council and had a strong influence on its teachings. He was shot and deeply wounded in St. Peter’s Square, one of the holiest places in the world for Catholics and others. He visited his assailant in prison and forgave “this brother.”

He traveled the roads of the world to preach the Gospel of Christ, and transformed the papacy into a pastoral and evangelical office.

Pope John Paul II was an outstanding intellect, with doctorates in theology and philosophy. He was at home with young people and in hearing confessions. I consider him, along with my parents, as the greatest influence on my life and on my priesthood.

Rest in peace, brave soul. Rest in peace. May the angels lead you into Paradise and may the martyrs receive you at your coming.