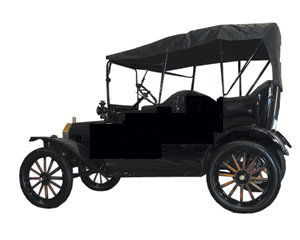 Years later Harold was in a barbershop in Bloomington. The conversation was centered on big dams. One man in the shop talked about a big dam he had seen. It was just west of Cody and was known as the Shoshone Dam. But that wasn’t the interesting feature. Just after leaving the dam he saw four men in an old rattletrap car. They had everything but the kitchen sink. They were going up a mountain but they did not have enough gasoline in the tank to overcome the force of gravity. They tried to push the car but couldn’t get the job done. They actually carried that Ford to the top of the mountain. He completed the story and Harold asked him if he really saw all of that. The man said he did and would swear to it if necessary. Harold let him reaffirm his statement and then told him, “I believe you. I was one of those four men.” That stopped the conversation.

We were headed for home so we knew that we had to travel east and south. We left Cody and headed south towards Cheyenne. We had to cross the Bighorn Mountains over roads that went mostly through sagebrush. We spent miles in low gear. Finally we got to a place where we could get into the big gear for a few minutes. Father and Bill were asleep in the back seat. Harold was dozing in the front seat. I was driving probably twenty miles an hour. Just ahead I saw a fence at right angles to the road. If there was a fence there must be a gate. I saw the gate so I did not have to slow down. Just before I noticed that the gate was open I saw a ditch this side of the fence. If there is a ditch there must be a bridge so I still saw no reason to slow down. I reached the point of no return. There was a bridge. Two planks each about twelve inches wide, just far enough apart to serve the purpose. About this time Harold woke up and sized up the situation. His hair stood straight up on end. When we reached the other side of the ditch he slumped back in his seat and meekly said, ” By gawd, I never want to do that again.” I don’t either.