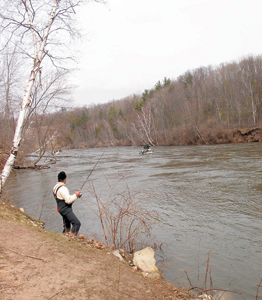 It has been a very long winter for some of us. Especially those that enjoy the great outdoors-fishing, hunting, camping.

A few weeks ago I was having a nice conversation with a good friend of mine and he was mentioning the annual Spring Steelhead Run at Manistee that his family would take. “Wow, that brought back some great memories of spring fishing in Wisconsin’s trout streams,” I commented. And to my surprise he said, “Well, how would you like to take a trip up to Manistee this weekend? If they’ve started to run, that is.” He didn’t have to ask me twice, I was on the internet checking it out the very next day, and sure enough according to Michigan’s Department of Natural Resources expert, Mark Tinello at the Cadillac Office Service Center in Cadillac, Michigan, “The run was just starting. They are catching steelheads and brown trout at the top of Manistee. The wild Manistee Steelhead Run began early this year. The weather has been warm this week, in the 50’s and foggy.”

I wasn’t prepared, but my fishing friend was. He said, “Get a pair of waders and some clothes. My fishing bags are packed. Let’s go!” So on Friday afternoon after distribution and mailing out the March 31st issue of The Waynedale News I was road tripping to Manistee, Michigan.

We set up camp at the Tippee Dam Campground. On Saturday morning we grabbed our fishing gear, a shore lunch and headed down towards the river. To get to the “good” fishing spots the dirt road to the river is the way to go. There were still some patches of snow and the ground was starting to thaw. You travel up and down over what the natives call a “whoopie” road. It is made of sandy muddy ruts a good 2 1/2 feet deep. If you don’t have a 4WD vehicle—-forget it!

It felt good to be fishing again. With my waders on, I took my time entering the river. The current was fast. The river was high. The sun came out from behind the clouds it was warming up. Across the Big Manistee River I could see a crowd of people fishing from the public access site-nearly elbow to elbow. We walked down stream. It wasn’t nearly as crowded. We were able to work our way into a fairly nice spot. The gentleman next to me hooked into a nice steelhead moments after I arrived. He landed it like a pro. It was 28-30″ long and weighed about 10-12 lbs.

My gear was like a lot of gear on the river during steelhead run—-8-foot Ugly Stick, Shimano reel, 15-20lb. test Berkeley monofilament. Lines were tied with sinkers, beads, and a #6 hook baited with a neon-orange colored sack filled with salmon eggs. This was by far the most popular bait for steelhead fishing, but some fishermen were also using flys or any assortment of Daredevils.

I soon found out that steelhead fishing was not like fishing for rainbow trout along the Wisconsin streams. The technique is the same. You cast out into the stream or river letting your bait float downstream, hoping to avoid the fallen trees and branches that lie under water.

Taking aim towards the center of the river I allowed the current to carry my bait downstream cast after cast. I’d been working the river bouncing my bait 1-2 inches off the bottom. Occasionally feeling a soft hit, I’d set the hook, but to no avail. I had set on a snag, not a fish. It was after two hours of fishing when it hit. It was finally my turn to yell, “Fish on!” but then I added, “I think.” Then, Yes! “Fish On!” I finally saw my rod bend nearly in half. This one hit hard-indicating a steelhead. I gave it my best hookset. Of course, the fish headed upstream pulling my line out further. “Keep your tip up!” my fishing friend told me. I struggled to hold him from getting away. “Keep your line taut.” I made a few more cranks on my reel. As I began retrieving my catch I saw the silver flash of a large steelhead come to the surface. This mighty fish did a 360-degree turn on the top of the water and showed me his pink belly before he rolled towards the bottom of the river. That was when he got away. It was a big one, for me, anyway. This was worth the trip.

As we broke camp on Sunday, I was still wondering how that steelhead got away. Was it the knot I tied? Should I have used a steel leader or the “uni” knot? Should I have tried to prevent him from rolling or should I have reeled-in when he started to roll? I guess I’ll never know. But as with any fishing or hunting campout, it’s not the “big” one that got away—- it is the good times. I can’t wait to get back—-on location at Manistee River, Michigan.