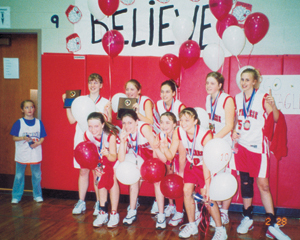 You just KNEW it was gonna be this way! Everybody knew this game and the Catholic Youth Organization Championship would come down to the final 2 minutes. St. Therese and St. Joe Hessen Cassel were so evenly matched. They met in the first CYO game of the year with Hessen Cassel winning that overtime game by 3 points. Neither team would lose a league game after that. St. Therese started firing on all cylinders during the Christmas Tournament at St. Francis and never looked back! Hessen Cassel won the regular season championship with an undefeated 6-0 record, followed by St. Therese at 5-1. Both teams won their first two tournament games. St. Therese beat St. Al’s 34-10 in the tourney opener. They then edged Queen of Angels 32-27 setting up the much anticipated dream showdown in the finale with Hessen Cassel.

The pre-game atmosphere was fantastic. The place was packed. And the game itself certainly lived up to all the hype. It was very well played, but low scoring, because it featured two strong defenses. Plus, neither team could fastbreak much on the other.

After three evenly matched quarters, St. Therese clung to a four-point lead. But Hessen Cassel really came out with fire in the final stanza. They finally took the lead by one pair of Kelsey Wyss free throws late in the game.

St. Therese head coach Allan Allphin called a time out with about a minute and a half to play and confidentially told the Crusaders, “We’re going to win this game at the free throw line,” since his team was in the 1 and 1 bonus situation. He then instructed guards Kristi O’Brien and daughter Andrea Allphin, both excellent free throw shooters, to penetrate to the bucket in order to draw a foul. O’Brien did just that, driving in from the right wing with 1:19 left. She calmly drilled both ends of the 1 and 1 to regain the lead for the ‘Saders. Then, after misses by Hessen Cassel on their last two possessions (and huge rebounds by Andrea and April White), Allphin nailed 3 of 4 free throws to ice the 33-29 victory! Her last two charity tosses came with 6 seconds to go, creating a 4 point lead, and thus put the final nail in the coffin.

As the buzzer sounded, this closely-knit group of dedicated 8th graders broke into a wild celebration, thus achieving their season-long dream. St. Therese DID win the game at the free throw line as their coach had prophesized. They hit 10 of 14 free throws in the game and 5 of 6 in the final 2 minutes!

Point Guard Kristi O’Brien who never had a turnover in the entire game, led a very balanced scoring attack with 7 points. Post player Bailey McGrew, probably this years most improved player, never missed a shot and had 6 points and 5 rebounds. Melanie Huhn had 5 points, 5 boards, and 3 of 4 from the line. All in all, St. Therese had 7 girls score between 3 and 7 points, a true team effort! Jessica Beck, who possesses an incredible vertical leap, led the team in rebounds with 6 and was co-leader with Krista in steals (4 each). April White nailed the teams’ only 3-point basket of the day and collared 4 boards herself. Other key team members include much improved Danielle Landon, Lindsay Shutt, who had 4 key second half points off the bench and defensive specialist Kaitlin Hire who had the key steal of the contest, leading to one of Shutt’s buckets.

Assistant coaches Larry Cobb, Michelle Hamlin and shooting expert Tom Rehm contributed immensely to the teams continued improvement all year long. And now this talented 8th grade group of St. Therese girls has won the championship trophy and medals. But their fun is not over yet. You see, Coach Allphin told the girls in their pre-game talk that, if they won the championship, they could all shave his head bald, cut his mustache off, and ‘pie’ him, too. No date has been set yet for this eagerly anticipated ceremony. But there won’t be a girl on the team that will miss this.