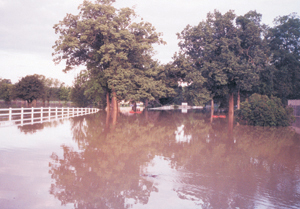 1. Monday morning, July 7, 2003 started just like most of my mornings. Up early, and then a ride through Foster Park. This morning would be different. Where I generally ride there was a large pool of river water blocking the road. This is not too unusual, as a lot of rain often puts the St. Marys River over the road at the Foster Park Golf Course. If the water isn’t over the axles on my ten-speed, I just coast through, and go on with my ride.

2. Monday morning, parts of the 4-foot white fence that borders the Foster Park clubhouse were totally under water. I turned around and pedaled out of the main entrance over to Hartman Road and tried to get into the park that way, but there was water across the road at the Little League ball diamonds. I sat there and waited for a few minutes, enjoying the morning in spite of my shortened ride.

3. Some members of the Bishop Luers Cross-Country Team jogged by and most of the other early morning exercisers were milling around, watching the river rise.

I have seen the St. Mary’s in flood before, but this was looking to be something ominous. The weatherman was calling for more rain and from the looks of the surrounding areas, there was no place to put the extra water.

4. As usual, I had my camera with me so I took a few pictures and proceeded back home to get ready for work. On my way into The Waynedale News, I drove through Belle Vista to take some pictures of the Fairfield Ditch. The ditch runs through Belle Vista before dumping into the St. Marys River at the soccer fields just off of Winchester Road. The ditch was running high, but not out of its banks. There were some local homeowners on the bridge, including Marcus Marquart. Marcus had already lost his TV, computer modem, and garage door opener to a lightning strike on Sunday night. He and his neighbors were nervously watching the water as it rose steadily towards the bridge.

5. Tuesday was a ‘no-bike-ride’ day as it was raining again and the high water situation all over town had worsened. There was now flooding on Fernwood Avenue in Waynedale. The new dike system seemed to be working in the downtown area, but in Waynedale, the water was reaching into places that it had never been before.

Calhoun was now closed at Tillman, Fairfield was closed at the old Stellhorn Bridge location (Lower Huntington at Fairfield) and Winchester Road was under water at Lawn & Turf Landscaping. The homeowners on Winchester Road between Broadview Florist and the Baer Field Thruway were in a desperate struggle to keep the St. Mary’s River out of their homes. Homeowners and volunteers were filling sandbags and placing them around their houses. There were some pumps available but the river just kept coming. On Tuesday evening they lost the battle. The City shut off their power for safety reasons and it looked as if the area was going to be evacuated.

Mike Rousch, who works for the City Traffic Division and the other homeowners, had a different idea. They regrouped and started a new line of defense along Winchester Road. They had lost the houses on the northeast side of Winchester Road between Winchester and the river but there were still plenty of houses on Mayflower, Win Avenue and Shamrock that could be saved.

6. Deb who lives at 5541 on Winchester Road had been working filling and placing sandbags for two days now. The water was 3-foot up on her front door and the flowers that adorned her beautiful yard were now underwater. Her house was among the first group next to the river that had been flooded. She was dirty, wet and tired, but she wouldn’t quit. At a time when most people would just sit down and cry, she worked on. Her neighbors were fighting the battle on a new front and she was right there with them.

7. Mike Rauch had taken time off his city job so he could stay on Winchester Road with his neighbors and keep up the fight. A city dump truck would come down Winchester Road filled with sandbags. The bags had been loaded and tied by volunteer’s downtown at the City Garage. The big orange truck bed would lift and a load of freshly filled sandbags would tumble onto the road. A line of neighbors and volunteers would immediately form and the human chain would gobble up the bags one by one and pass them down the line, building and reinforcing the new dike.

The floodwaters had almost reached the front door of 5406 on the southwest side of Winchester. With the new dike 2 bags high, and over 50 yards long, the pumps were turned on and a crew of volunteers and neighbors were now pumping the water back into the river. More trucks arrived and the dike increased in height and length. Every person filling sandbags downtown and every person lifting passing and placing sandbags was now part of a winning team, fighting back the river.

8. When I visited the Winchester Road dike on Thursday morning, Mike Rauch was still there, minding the pump. The pump was only needed part time now, as the river had been forced behind the dike and was only seeping through in a few places. Still, it lapped at the tops of the sandbags.

All day Thursday, was a fierce struggle at the bridge in Belle Vista. Homeowners, volunteers and city workers were doing everything possible to keep the water out of their houses, but they were losing ground. The Fairfield Ditch, which is generally not much more than a trickle this time of year was now a foot above the bridge deck and the sandbagging could only do so much. The water was staying level Thursday but didn’t seem to be receding.

Saturday morning I was out riding my bike again and ran into Marcus Marquart. He lives on Gates Court, just six houses from the Belle Vista bridge. I asked him if the water had gotten into his house. “No, we were lucky, the sandbags, the pumps and the city working alongside the neighbors kept the water out of my house, but others weren’t so lucky. Sometimes you just don’t know what to do, but we did all we could,” he said. Monday Morning, July 14th, just seven days after it all began, I rode my bike over to Foster Park. The river was back within its banks again and now all that was left was the huge clean up.