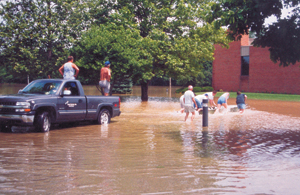 Thoughts About the Great Flood of 2003

Do you remember the past several summers when the temperature in July was 95 degrees, plus? It doesn’t seem too long ago that we were complaining that our lawns were brown and dead! We wondered where the water went. Now we know! Nature was saving it up for July of 2003!

The whole Midwest has been battered by thunderstorms and flooded by rain like many of us haven’t ever seen. For those of us who remember the flood of 1982, it may have looked like we were going to have a repeat of that flood. But, the flood of 2003, at this writing, appears to be worse.

But the good thing about bad times is that they can bring the best out in us if we choose to offer our best. And, that is what I have witnessed in the past several days here in Fort Wayne. As of this writing, Calvary United Methodist Church is surrounded by the waters of the Saint Mary’s River. Our building is flooded. But, we are not alone. Other congregations, families, and businesses are suffering from the onslaught of too much water too fast. And what is so amazing is that many very diverse people from Fort Wayne and the surrounding area have chosen to demonstrate that our true character is that of compassion. Like many of you, I grow weary of bad news. I tire of hearing it. But, even though the rivers have risen to record highs, the people of Fort Wayne have banded together to fight the flooding. We have bagged sand together. We have reinforced homes, congregations, and places of business. We have gained blisters on our hands, but friendships in our hearts. We have shoveled, bagged, and tied knots on countless bags of sand. For brief moments we have met people who have chosen to help, not even knowing the names of their neighbors. I was with a sandbagging team at the tennis courts on Tillman Road. And a mom and her daughters were there. I didn’t learn their names. It was Wednesday, July 9, after 8:00 p.m. The Emergency Operations Center had dispatched more sand and bags. The big trucks drove in and dumped their loads. And I said to the mom, “I think we have enough sand, now.” The rain was coming down hard, and I thought we might want to all get under the roof of the building by the tennis courts. But, she said, “We’ll keep bagging. Other people will need these bags.” I had to return to Calvary to help move important furniture and records to higher places. When I returned to Tillman, the mom and daughters were still there, and others had come to help. When I left to return again to Calvary, other neighbors were still bagging, and one person from Calvary said, “I’ll stay. Others may need this sand. I can help them.”

There was a team of approximately 75 people who came to help sand bag at Calvary. Thank you so much! The team was made up not only of Calvary folk, but people in general from the community. The community! What a wonderful word!

Thank you friends and neighbors at Waynedale United Methodist Church, Christ United Methodist Church, Good Shepard United Methodist Church, 1st Christian, Waynedale Baptist, Avalon Missionary Church and Youth Group, and Mount Calvary Lutheran Church, D.O. McCombs Fairfield Chapel, and Klaehn Fahl and Melton on Winchester Road and leadership from the government of the City of Fort Wayne, for reminding all of us and others, that our true character is formed not just by what we believe but how those beliefs are lived out! I know that in days ahead, more acts of compassion and kindness will spread across Indiana. Isn’t it amazing how those acts trigger other acts of kindness! It might become an epidemic!

“How very good and pleasant it is when kindred live together in unity! It is like the precious oil on the head, running down upon the beard, on the beard of Aaron, running down over the collar of his robes. It is like the dew of Hermon, which falls on the mountains of Zion. For there the LORD ordained his blessing, life forevermore.” (Psalms 133 NRSV).