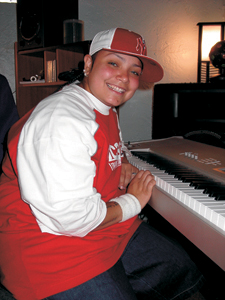 The Waynedale News caught up with Amanda Perez last Friday. I last interviewed Amanda in February of 2002.

Amanda grew up in Waynedale and was discovered by a talent scout who signed her with Universal Records. I wanted to talk to Amanda again to see if the fanfare had created any changes in her life. I visited her in her new recording studio.

Amanda was sporting some new tattoos, which is normal for an artist in the music business. Her hair is corn-rowed and a tattoo on one arm says ‘Hidden’ and the other arm says ‘Tears’. In addition to the new tattoos are an eyebrow ring and a tongue stud. She was relaxing in baggy sweats and sported a baseball cap. She wore diamond and platinum rings on her hands and on her neck was a tattoo that said ‘Gemini.

Beneath all the exterior ornamentation was the same soft smile that makes her so attractive. She has a gentle disposition to go with her smooth olive complexion and she seemed more comfortable with herself than in our first interview. Her nephew, Angelo Russell interrupted us briefly to ask her a question and then disappeared. “He travels with me and is also my masseur,” explained Amanda.

As we sat down to talk, it was evident that Amanda was still Amanda in spite of all her newfound wealth. She has become more assertive in the past year. She is now with Virgin Records and has started her own label called A-Hype Records Inc.

“I sometimes do two shows a night for five days in a row. The other three weeks in the month, I am either at my condo in LA or back in Waynedale working on my new CD. I just returned from a concert in Stockton, CA. where we drew 10,000 fans for a one night performance.”

Amanda explained that promoters call her to schedule performances and then she chooses what schedule she can handle. “If I can, I’ll set up 3 or 4 shows all in the same location so I don’t have to travel so much.” Amanda likes Waynedale, not just because she grew up here, but she is also close to her parents and the airport.

Alfredo, Amanda’s cousin from Cuba, popped in for a minute and then left. Her studio consists of a keyboard, 3 drum machines, 2 Technique turntables, microphones, mixing board, vocal amps, a number of huge speakers and a monitor.

“Do you jot down ideas and then write the music?” I asked. “No,” she answered, “I keep it all in my head. The lyrics, the music, the rhythm, it’s just all in there and I sit down and it all comes out. I create a DAT (Digital Audio Tape) and send it off to LA. It gets edited and comes back to me for more modifications. I have four new singles completed for my next CD which will include 7 to 10 songs.”

I asked her if she wanted me to relay any messages to her many fans. She just laughed and said, “Tell them to vote for my two singles, ‘Angel’ and ‘Never’ on ‘Lady of Soul’, Soul Train Awards, at www.soultrain.com.”

At 23 years old, Amanda is the most tested female vocalist (meaning her singles are the most requested songs to be played on radio) in the country. Check her out on her web site at www.amandaperez.com.

Before leaving I asked her if there were any new men in her life? “No,” she answered, “I am still playing the field. Sometimes guys turn out to be not what they seem.”