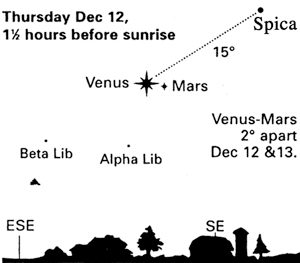 Four planets and shooting stars will decorate December nights like ornaments on a Christmas tree. Venus, Mars, Saturn, and Jupiter will be easy to find in either the evening or morning sky.

Venus and Mars shine a mere 1.6-degree apart during the first week of December. Venus is at its greatest brilliancy on December 6th glowing at a magnitude –4.7. On that same day, Mars is only 1.33 degrees to the right of Venus at magnitude+2.3. Venus is the brightest and Mars appears somewhat red. Look in the southeast sky one hour before sunrise (around 5: 45 a.m.)

Scan the sky above and to the right of Venus and Mars to locate Spica. Spica is the brightest star of Virgo. The star is bluish-white and in reality two really huge stars larger than our sun shining 275 light years away.

Stargazers might get lucky on Friday, December 13, when the Geminid meteor shower is due to peak. Under ideal conditions (very dark and clear) the Geminids could produce as many as 75 slow, graceful meteors per hour. The bright and yellow meteors radiate from Castor and Pollux, the twins of Gemini.

Start looking anytime from 10:30 Friday night until 5:30 Saturday morning. Geminids enter Earth’s atmosphere at speeds of 78,000 miles per hour, only half as fast as the Leonids we missed seeing last month due to uncooperative conditions.

Jupiter is adorning the ENE night sky at magnitude –2.3. Look anytime 5 hours after sunset (about 10:00 p.m.). As the month of December progress, the planet will rise a bit earlier each evening so that by the end of the month it will be rising just 3 hours after sunset.

The ringed planet Saturn will be at opposition and thus the biggest and brightest it ever gets in its 30-year journey around the sun on Tuesday, December 17. Saturn will be only 748 million miles away. Back on June 9th of this year it was 935 million miles away. Not only is Saturn closer to earth but stargazers will be able to see the southern side of Saturn’s rings tilted almost wide open. Find a friend with a telescope to catch a glimpse of the planet’s rings as they reflect sunlight making Saturn much brighter than usual and the rings at their most dramatic.

Four celestial bodies and a night of shooting stars await those setting their eyes towards the heavens during the month of December. Bundle up and happy Stargazing!