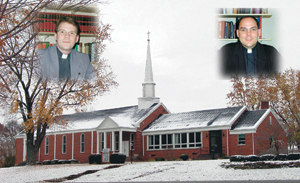 For the past year Bethany Lutheran Church has been celebrating her 50th anniversary. Celebrations have included a special preaching series last Advent; a series of presentations touching on church history throughout the year by speakers such as Rev. Daniel Preus, Rev. Jon Vieker, and Rev. Dr. Cameron MacKenzie; an anniversary banquet and congregational photo; the commissioning and installation of a stained-glass chancel window depicting Christ’s victorious resurrection; the obtaining of beautiful, 19th century paintings of the four Evangelists, Ss. Matthew, Mark, Luke, and John, to decorate the west wall of the sanctuary; a youth lock-in to heighten the children’s awareness of their congregation’s heritage; and several festive potluck luncheons.

Bethany began in 1952 as a mission congregation sponsored by St. John’s Lutheran Church, which provided the 2.4 acres of land at 2435 Engle Road, just south of Indian Village. The first church building was completed in February 1952, and services began on February 24th. Rev. C. G. Shira was called as Bethany’s first pastor in April of that year. When the congregation formally adopted a constitution in June 1952, there were eleven adult members. By the end of 1953, Bethany was financially self-sufficient and so was no longer considered a mission of St. John’s. A parsonage was completed in 1954, and the initial church building was greatly expanded to its present size in 1957. By her 10th anniversary in 1962, Bethany had 740 members.

Bethany is driven by her zeal in proclaiming the Gospel of Christ purely, and demonstrating the true compassion of Christ for all people. Bethany’s focus on the Gospel fueled her early, rapid growth and innovative approach to proclaiming the Good News. From 1954 to 1967, summer worship services were conducted at the Fort Wayne Drive-In Theater, which appealed to many non-members and un-churched people. Worshipers would remain in their cars as the service, conducted from the concession stand roof, was broadcast on the theater speaker system. Bethany also made improvements to her sanctuary to adorn the preaching of the Gospel there. In April of 1970, an 18-rank Wicks pipe organ was dedicated and still provides beautiful accompaniment to Bethany’s services. The artistic stained-glass windows fill the sanctuary with colored light. They were installed in 1975. In 1990, driven to proclaim the Gospel even more clearly, Bethany left her affiliation with the Evangelical Lutheran Church in America. She joined the Lutheran Church—Missouri Synod and is still a member of the English District of the LCMS today.

During her 50 years Bethany has been served by seven pastors. Her first was Rev. C. G. Shira, who served from 1952 to 1959. Rev. R. Heidmann was called from Canada to serve from 1959 to 1963. Bethany called Rev. G. H. Vander Schaff from Illinois to serve from 1963 to 1967, then he was no longer able to preach due to a voice ailment. Rev. P. A. Kloth was called from Indianapolis to serve from 1967 to 1970. Bethany then called her fifth pastor, Rev. S. S. Urberg, from Illinois to serve from 1970 to 1996. Thus, Pastor Urberg faithfully served Bethany for 26 years, over half her life as a congregation. In early 1997, Bethany called Rev. C. E. Varsogea to serve as Pastor, and he is currently the Senior Pastor of the congregation. Bethany called her first Associate Pastor, Rev. C. D. Trouten, in 2001.

Bethany, still located at 2435 Engle Road just west of Bluffton Road, offers divine service on Sunday morning at 9:00 and on Wednesday evening at 7:30. Bible Class and Sunday School is offered on Sunday at 10:30. Matins is prayed every weekday at 8:15 AM. Bethany invites you to worship and celebrate God’s astonishing Grace with us.

Still driven by her zeal in proclaiming the Gospel, Bethany has a renewed emphasis on welcoming and caring for her neighbors. She offers activities for youth and families and for both women and men. One popular activity for families has been an annual Drive-In Movie Night, where a family friendly movie is projected on the outside wall of the church. Given her history, this event has a special irony. You may get to know Bethany better by visiting her website at www.BethanyLC.org or by calling 747-0713.