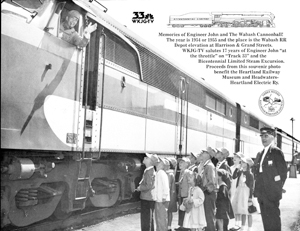 I had an opportunity to talk to a kid who had an extraordinary experience. In his memory today it stands, still, as a highlight, even though he is now in his 5th decade of life. TV was new back in the 50’s and it was the first time kids had been introduced to this exciting new life, which is so taken for granted today. I suppose the kids who first had automobiles, and didn’t have to hitch up the horse, had a similar feeling. One of the programs in those very early years of TV was Engineer John. The kids would sit in rapt attention as the show, which was created just for kids, entertained spellbound enthusiasts. Now, back then, the most traveling kids got to do, was to visit their grandparents. Their world was small, intimate and secure. So, with great excitement the kids were offered a challenge by Engineer John, who asked the kids in the viewing audience to send their names in for a chance to win an adventure of a lifetime. If they were chosen, they would win a trip on a train from Ft. Wayne to Lafayette. The excitement ran high. J. Cline had his mother help him write a letter to Engineer John. Then the exciting wait came. I’m sure everyone out there remembers such a time in their own lives. Waiting to win an elusive prize which usually never came. But in J. Cline’s case, his dream came true. J. says that he probably was about 10 years old, and he came home from school to a very excited mother. She had been contacted and told that her son was one of the chosen kids to take the train trip to Lafayette with Engineer John. He was in a state only a young child can get, when the world is unexplored, experiences are new, and adventures are all out there ahead just waiting for them. On the greatly anticipated day, and with great excitement, they boarded the train. No parents! Freedom! And best of all, a trip with their hero, Engineer John! As J. boarded the train, he knew no one else. Of course there were chaperones, but to him, just a trainload of kids, Engineer John, his TV hero, and the famous puppet, was almost too much excitement to bear. The kids all made fast friends, and although most would never see each other again, they shared a common experience that few kids would ever share in those days. J. remembers a picture was taken of all of them with Engineer John in front of the train. They were all issued train hats. Talk about excitement!! He now has those memories, which may seem almost incidental in today’s age. His picture and his hat have long been treasured. If life were just so simple today. Childhood memories should always be thus. Happiness, adventure, and the building of memories to last a lifetime. So, we are grateful for Engineer John, Buffalo Bob, and all the other entertainers who gave us the adventures of childhood, where never was heard a discouraging word, and the skies were not cloudy all day. Bless the children,