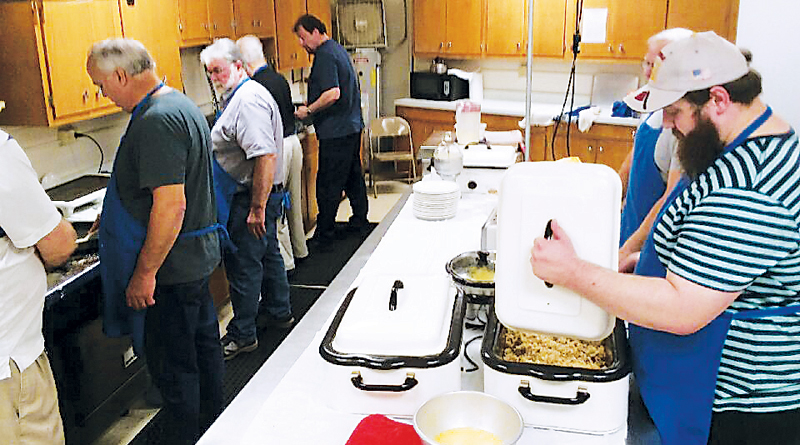 “One of the best kept secrets in Waynedale” continued its tradition recently, doling out breakfast goodies to all in attendance.
The Waynedale Masonic Lodge No. 739 recently hosted their monthly Community Breakfast, welcoming anyone who had an empty morning belly and was willing to give the Masons a donation of their choice.

Located at 7039 Elzey Street, the Waynedale Masonic Lodge has been doing their Community Breakfast event on the first Saturday of each month since about 1993, according to Justin Pose, a Masonic Worshipful Master.

Pose said the idea of their event is not just to offer breakfast to hungry folks, but to give a little back to the community while also bringing people together.

“It keeps us connected,” Pose said. “What you’re always reading about is that people feel connected through Facebook or through their phones. This is actually meeting someone face-to-face and shaking hands. With something like this, you get an actual human connection.”

On one recent chilly October morning, about 20 folks crowded into the building’s downstairs area within the first few minutes of the lodge opening its doors at 6 a.m., to munch on their choice of breakfast fare, including eggs (prepared in the style of their choice), toast, bacon, sausage, pancakes, and French toast.

According to Keith Jacobsen, Junior Warden with the lodge, the breakfast usually brings in about 100 people, roughly 75 community members, and about 25 Masons working the event.

All the food prep and clean-up is done by brothers of the lodge, Jacobsen said. Those brothers often include Bob Beir; Don Feller; Dallas Day (best known as the “pancake man”); and Pat Pedden, known as a “Jack of All Trades.”

Donations usually raise about $100 for the lodge from each breakfast, Pose said.

The Waynedale lodge is comprised of about 370 members said Pose, a 38-year-old teacher who grew up just off Sandpoint Road. Pose said his father also was a Mason, and he also proudly stated the Waynedale lodge recently had been declared the top Masonic Lodge in Indiana, which has more than 350 lodges statewide.

One couple sitting near the rear of the room on a recent Saturday morning said picking their favorite part of the event was easy.

“We just love all the food,” said Paul Hirschman and his wife, Barb, Fort Wayne residents who’ve been coming to the event for about a year. “It’s all made-to-order, and so, so good.”

Pose said it’s not just about eggs and pancakes, but really is about community.

“A lot of people will tell us that this is the best-kept secret in Waynedale. We’re proud of being here,” Pose said, “My whole goal is to get more involved in the community. Waynedale is still kind of a town within a town, and we want to be a big part of that.”

A Look Back At Our Community In 2019, Featured Local News