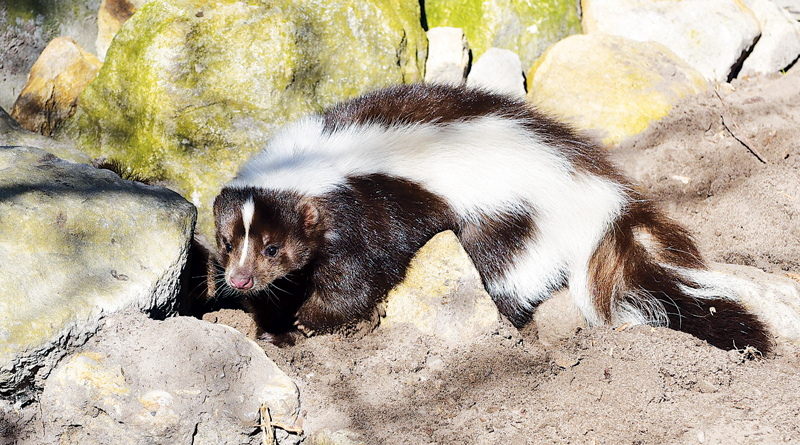 When my older daughter turned into our driveway a few nights ago, in the headlights we saw a small animal crossing the yard. My daughter stopped the car and we watched as the little animal walked slowly across the lawn, then around the corner of the house and out of sight.

The animal was about the size of a cat or small dog. It was black with white on the back of its head and in a line along each side of its back. It had a bushy tail which it held up in an arc. It was a skunk of course, a striped skunk.

One of our dogs had gotten too close to a skunk in the yard once. It was weeks and many baths before we got the skunk smell off that dog.

The smell, the stink, is the feature skunks are famous for. It comes from two scent glands at the base of the tail. Those glands produce the horrific smelling fluid which skunks spray. To spray, however, a skunk has to have its tail held high above its back. Grab a skunk by its tail, pick it up and with its head hanging down it can’t spray, so I’ve been told by a friend. I’ve never tried it however, and I don’t intend to.

Striped skunks are largely North American animals. Their range is from coast to coast in North America, Canada and northern Mexico. There was a time when they must have been common. Thousands were trapped for their fur which was made into women’s coats. The fur was dyed so it was all black and called Alaskan sable.

Skunks are most often active at night. But they do sometimes go foraging during the day. As a boy I occasionally saw one during the day in woodlands and in grassy fields. I saw one in an Indiana Park in mid-afternoon a few years ago. But skunks have become uncommon. Now, for me, it has become a thrill to see one. In recent years when I see a skunk it’s usually dead, lying in or along the side of a road.

Skunks are omnivorous. They eat insects, particularly grasshoppers, mice, eggs, small birds, grubs and carrion. They eat berries, other fruit and carrion. From the number of insects and mice they eat they would seem to be beneficial. But try to convince a farmer with chickens that skunks are beneficial. Though skunks don’t eat chickens, or so it’s reported, they do kill them and they seems to relish chicken eggs.

A skunk’s home is a hole in the ground, often a hole made by woodchucks, or a hollow log and stump. Skunks don’t hibernate although they do become inactive and their heart rate and temperature drop during severe winter weather. When the temperature warms enough for snow to melt, even just a little bit, skunks will be out making tracks in the snow.

Skunks mate in late winter and early spring and their young are born in summer. They’re blind when born but when their eyes open they can walk and follow their mother, single file, learning to forage.

Skunks make interesting pets. They’re quite passive and can be petted, even cuddled. The scent glands can be removed but that isn’t necessary. I’ve petted a skunk that still had its scent glands. But I was apprehensive. I’m content to just see a skunk, in a woods or field or walking across my yard.