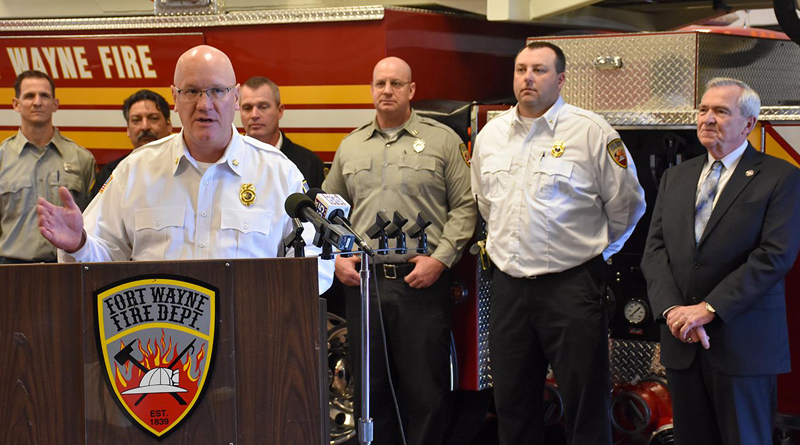 We have nineteen new firefighters serving the City of Fort Wayne and this 90th recruit class was one of the most diverse in the department’s history. Public safety is a top priority and we have an outstanding fire department committed to keeping our residents and businesses as safe as possible. We’re fortunate to be in a position to add new firefighters to enhance the department’s level of service. Under Chief Lahey’s leadership, the Fort Wayne Fire Department is making a meaningful difference for all of us.

I recently joined Great Lakes Capital and Bradley Company to cut the ribbon to open Skyline Tower, a $42 million mixed-use development in the heart of downtown. Located at 855 Webster St., Skyline Tower rises 12 floors above its downtown neighborhood and features 123 distinctive apartments, as well as 30,000 square feet of commercial space. The first floor is home to Ruth’s Chris Steakhouse, while the second floor is the regional headquarters of First Merchants Bank.

A unique public-private partnership made Skyline Tower possible. The development was the first to be approved for matching funds through the Regional Cities Initiative, resulting in a $2.8 million investment. Additional support came from the IEDC’s Community Revitalization Enhancement District (CReED) tax credit, federal New Markets Tax Credits, the City of Fort Wayne’s community and economic development arms, and private investment. Old National Bank was the lead financial partner with collaboration from Lake City Bank and Salin Bank. All three of the private lending partners are Indiana owned and operated.

Skyline Tower is a tremendous addition to our growing and thriving downtown and is another example of how we’ve positioned Fort Wayne as a leader in providing live, work, and play opportunities for individuals, families, and businesses.

I joined RTM Ventures recently to announce the language contained in the economic development agreement for the Electric Works project has been agreed to by the development team and the City of Fort Wayne Administration.

Electric Works is a mixed-use district of innovation, energy and culture, developed as a public/private partnership between RTM Ventures and the City of Fort Wayne. A redevelopment and adaptive re-use of the former General Electric campus, Electric Works includes 39 acres, 18 historic buildings and more than 1.2 million square feet of space that will maximize the facility’s density of existing structures and offer a broad array of uses – including innovation/education, residential, commercial, community and hospitality.

I’m encouraged by the progress we’re making with Electric Works as we work together to continue the positive momentum and investments we’re experiencing in Fort Wayne. This is an important next step in the process, and I want to see the project become a reality and succeed. We recognize that successful public-private partnerships are critical to advancing our community and region as a point of destination for job and business growth, strong neighborhoods and quality of amenities that are attractive and unique. My administration, our colleagues in Allen County government, the CIB and RTM have been working diligently for several months and will continue to work in a collective effort to determine the best path to help Electric Works move forward.

Members of the newly formed Public Art Commission were sworn in on August 30 and held their first meeting following the swearing-in ceremony.

Two practicing artists, Jan Krist Finkbeiner and Rena Bradley, were nominated by Commission members during the first meeting
In March, City Council and I created the Public Art Program, which is overseen by the Public Art Commission. Councilmen Glynn Hines and Tom Freistroffer sponsored the legislation. The Art Commission will commission, review and select art to be displayed in public spaces with the goal to enhance the visual environment and strengthen the positive reputation, brand and stature of Fort Wayne and its neighborhoods.

The Public Art ordinance also created the Public Art Fund, which is overseen by the Commission and used for the creation and placement of public art throughout Fort Wayne. Private grants and donations can be made to the fund, and a Public Art Giveback program has also been established. The giveback program asks developers who receive a Tax Increment Finance incentive from the Fort Wayne Redevelopment Commission to contribute, from their own funds, an amount equal to one percent of the incentive to the Public Art Fund. The maximum contribution is set at $100,000, and at least 50 percent of the funds must be invested in artwork in City neighborhoods.