Skip to content
A Look Back At Our Community In 2019 Featured Local News Spotlight The Great Outdoors
August 31, 2018January 19, 2019 Michael Morrissey 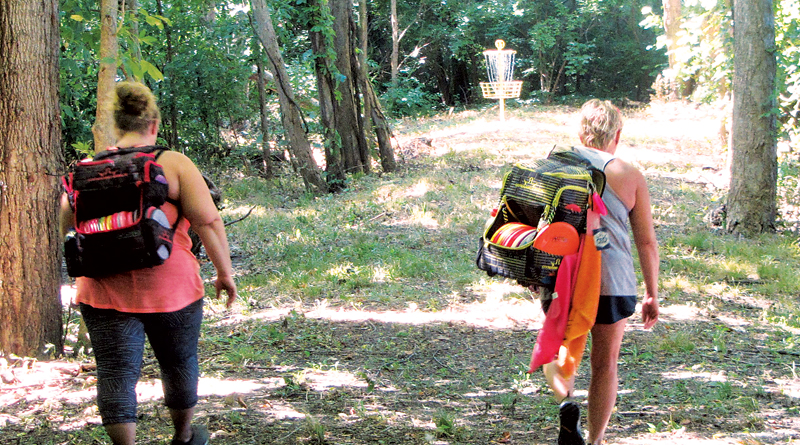 A local park is sporting a new and improved disc golf course, courtesy of the Fort Wayne Parks Department and a local club.

The park’s course – located along Tillman Road between Calhoun and Lafayette Streets – was chosen for the improvements because other parks were either too busy with other activities or too near an existing disc golf course, according to Brian Miller, a member of the Fort Wayne Disc Golf Club.

“Our committee sat down with the Fort Wayne Parks Department several months ago, and decided Tillman would really be the best place to focus our efforts,” Miller said.

Disc golf works very much like regular golf, only players use a disc – or Frisbee – to complete each hole. And rather than sinking a ball into a hole, the object is to toss your disc into a metal basket (with chains to help catch the disc) in the fewest number of throws.

The discs are slightly smaller and heavier than ordinary Frisbees, however. The “drivers” – used for the players’ opening throws, are made of a thicker, harder plastic with a beveled edge. “You wouldn’t want to try to catch those,” Miller joked.

And while the Fort Wayne Parks Department bought nine new baskets for the new course, the club paid for the other 12 with its own funds, to the tune of about $350 a basket, Miller said. Individuals donated the money for two additional baskets, he said.

Miller said he also sold sponsorships for each new cement tee on the numerous holes for $150 each. Several businesses and individuals stepped up, contributing the cash for the tees. Signs on each tee denote those who contributed to make the work possible.

While donations helped pay for materials to build the tees, labor to construct them – and all the course improvements – were provided by the Disc Golf Club, Miller said.

Additional improvements made at the course include new cement tee pads, where players make their first throw, on several holes; new, fresh mulch along the fairways; and new directional signs throughout the course directing players to the holes and the next tees.

Because the park actually used to be a landfill, the improvements there serve a two-fold purpose, Miller said. “We’re not only creating something fun, but we’re reclaiming that land for a useful purpose,” he said.

Miller actually helped design the new course, and strived to make it challenging and varietal. “I wanted a variety of holes,” Miller said of his design. “Not just par 3-, 4- or 5s, but a course that was challenging throughout.”

The course’s grand opening was held on July 13, and featured officials from the local disc golf community, as well as the Director of Fort Wayne Parks and Recreation, Steve McDaniel.

“We are excited about the opening of Tillman Park Disc Golf Course and the potential for bringing more prestigious events to Fort Wayne,” McDaniel said during the grand opening.

Once the course was officially opened, the local disc golf club held a tournament there that attracted about 80 players, Miller said.

There aren’t any formal leagues that play at the course, although Miller said members from his 125-person club play there about every other Sunday during the warmer months. The other Sundays are played at Swinney, and pretty much every Sunday during the winter. Anyone is welcome to play at the course; there’s no cost to play. “All you need is your own disc,” Miller said.

Miller said he’s happy to have been a part of the course improvements.

“It’s free, it’s exercise, it’s fun,” Miller said. “It’s just another thing for people to do in this area.”

A Look Back At Our Community In 2019, Featured Local News, Spotlight, The Great Outdoors