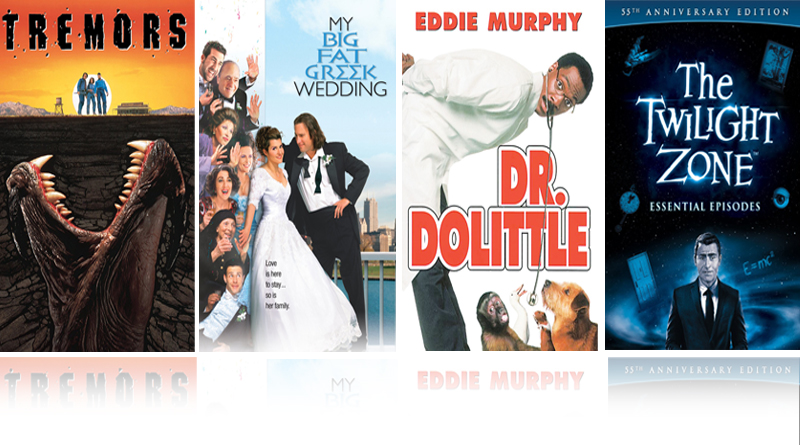 My father, Charly Butcher, passed away on August 15th. Movies were something that Dad and I enjoyed together, and one of my first memories of the movies is actually him taking me to see The Adventures of Milo and Otis and falling asleep. I was only around three years old, so at first I was scared, but after a minute, I decided it was fine and let him sleep. At home, Dad often fell asleep as soon as the popcorn ran out. Dad and I enjoyed a lot of movies together over the years—often bad old science-fiction movies. He also loved to tell me his ideas for sci-fi movies that he never got around to writing. In honor of my father, this week I would like to share a few movies that we enjoyed together.

Tremors (1990): Of all the B-movies that Dad and I watched together, this one sticks out in my memory the most. A couple of months ago, I was seeing a movie at an arty theater near my home and they played the original trailer. I almost texted Dad about it, but opted not to, because it was past his bedtime. I wish I had done so anyway. The basic premise of Tremors is that there are giant worms under the ground that periodically come up through the surface and eat people. It is kind of like Jaws, but in the desert. It has no production value, Kevin Bacon, and acting so bad that the whole movie looks like a spoof. This movie is Sharknado before Sharknado. We enjoyed it thoroughly.

My Big Fat Greek Wedding (2002): This sleeper-hit was the first film I officially reviewed for The Waynedale News. (My audition piece was about Signs, which Dad also really liked.) I was 15 years old, so my parents had to drive me to the theater still. Dad joined me for this movie, and we both enjoyed the story, but what stands out to me is how much my father liked the patriarch of the big, Greek family. I heard for years (years!) about Gus Portokalos (Michael Constantine) and his devotion to Windex as a fix-all.

Dr. Dolittle (1998): I’m sure that Dad watched this movie with us just because we were kids and it starred Eddie Murphy. It’s not the kind of thing he usually picked, but the hardest I remember him ever laughing was while watching this movie with us.

The Twilight Zone (1959): There were several summers during which Dad and I would catch part of a Twilight Zone marathon on TV. It’s possible that I liked watching the thought-provoking classic with Dad more than he liked the show itself. As an avid reader, one of my favorite episodes is “Time Enough At Last” (1959), about a bank employee who is down in the vault when a nuclear bomb wipes everything out. He finally has enough time to read all the books his friends and family keep harassing him about wanting to read. Dad really enjoyed another iconic episode, “Nightmare at 20,000 Feet” (1963), about a man who sees a monster on the wing of the plane during his flight. There are several seasons of The Twilight Zone available on Netflix and Hulu.

Breaking Away (1979): My father loved riding and racing his bicycle, and he and my mother dated during the time that she attended Indiana University in Bloomington, so it is natural that he would enjoy Breaking Away, about a working-class kid and his friends riding the Little 500. It’s a sweet coming-of-age film with elements of comedy and family drama.

A Quiet Place (2018): If I saw a movie that I thought Dad would enjoy, I would text him so he could convince Mom or my sister to go to see it with him. The latest movie I think Dad would have loved is this year’s A Quiet Place. I wish I had gotten a chance to watch it with him. The film is about monsters and has a tight plot and great sci-fi elements I think that Dad would enjoy, but it is also about the deep bonds between members of a family. Those parts would have resonated, I am sure.

A Look Back At Our Community In 2019, Featured Local News, Local Opinion Editorials, Spotlight