Skip to content
A Look Back At Our Community In 2019 Featured Local News Spotlight
July 6, 2018January 19, 2019 Michael Morrissey 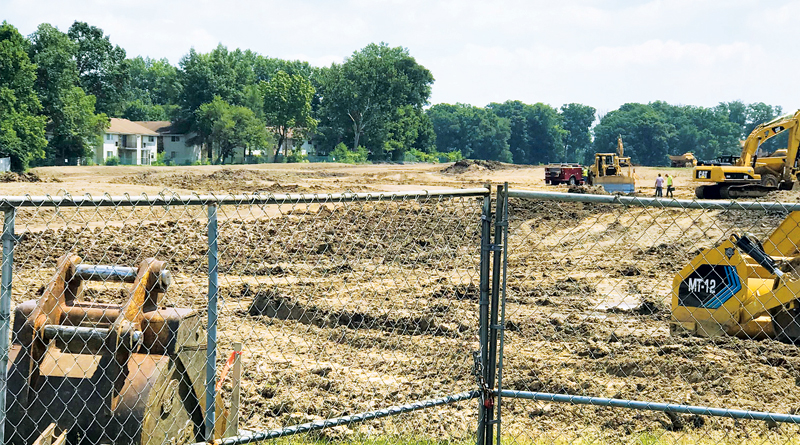 If you’ve recently driven by the Donald Ross Golf Course on South Calhoun Street, you might have assumed it’s totally closed right now.

With the arcing mounds of dirt covering the fairways and numerous construction equipment dotting the landscape, it doesn’t exactly look open for golfing.

But, while the course is going through a transformation, half of the course remains open for play.

The course – and much of the land it sits on – recently was purchased by Indiana Tech for a new sports complex the college is constructing.

Indiana Tech has planned about 6 million dollars worth of improvements for the land, according to Matt Bair, Director of Marketing and Communications for Indiana Tech. The work includes a new softball stadium, a new track-and-field complex, and a new 25,000-square-foot athletic facility that will host the school’s wrestling squad, as well as become the new home for coaching offices, media rooms, as well as laundry and sports equipment rooms.

Work on the site likely won’t be finished until 2019 or possibly even early 2020, Cook said. He said not only has the college done a great job of dealing with its purchase of the old course land, but the upcoming complex will be a great addition to that area of Fort Wayne.

“Indiana Tech has been first class all the way,” Cook said. “I think this [new development] will really be a gem for the south side of town.”

Located at 7102 South Calhoun Street, the original front nine holes of the course have been in business since 1927. The well-known clubhouse was built in the mid-1990s, Cook said.

The course was actually designed by a golfing legend by the name of Donald Ross. Though he passed away in 1948, in the early part of the 20th century, the transplanted Scotsman left behind a legacy of 413 courses all over the United States. His designs include such famous locations as Pine Hurst No. 2 in North Carolina, Seminole in Florida, and the site of the 1996 U.S. Open, Oakland Hills, just outside of Detroit.

Currently, the course remains a popular alternative to the city-owned golf courses. In fact, Cook said, the course reduced its fees recently because of the current construction.

While it once cost $21 for nine holes with a cart, now it costs $17. “That keeps us more in line with city courses,” Cook said.

Cook said while it’s sad to see half of his beloved course disappear, nine holes still remain. And the new development from Indiana Tech should make the area shine!

“I hate to see nine holes go away,” Cook said, “but I love what it’s going to become.”

In fact, Indiana Tech will keep the front nine holes open even after the new Indiana Tech complex is finished – probably in the spring of 2019 — Bair said, and has possible plans to use it for some of its course instruction.

“We’re very excited about obtaining this course,” Bair said. “We can definitely incorporate this into some of our programs.”

For more information about the course, go to their website: www.golfdonaldross.com