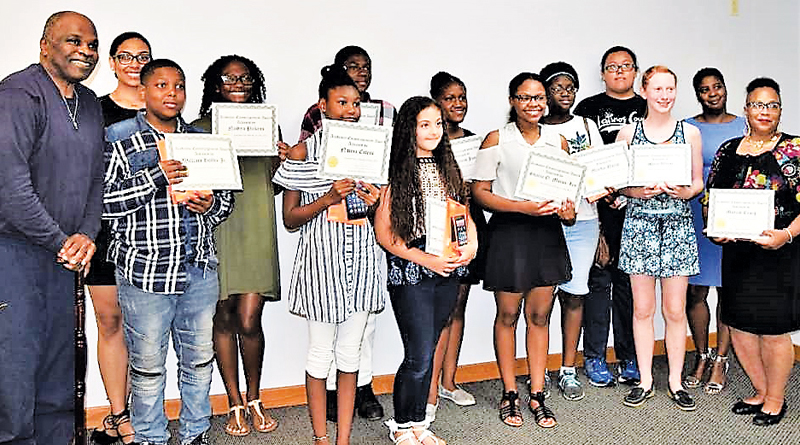 Al’Yson Harris moved here to Fort Wayne with her father from Florida, and she did not start at South Side High School until the beginning of her senior year. Her school counselor wrote in her letter of recommendation that despite being the new kid on the block, Al’Yson quickly adjusted and was able to graduate in the top 19% of her class while tutoring and taking a course at Trine University. She has been accepted at IUPUI in Indianapolis where she wants to study to be a Dental Hygienist or a Physical Therapist.

Aschlee Holloway wrote in her personal essay that growing up she saw very little of her father and missed him greatly, but she used that experience to commit herself to succeeding no matter what. Along with her schoolwork she became active in her church youth group, the Brave Sisters Volunteer Organization, and she became the captain of her dance team. This year she graduated from Northrup High School, applied to Indiana University, Bloomington and was accepted into the Indiana University Groups Scholars Program.

Chloe Mostes wrote in her personal statement that despite financial setbacks growing up, her experience at Bishop Luers High School was a most valuable experience for her development. She completed honors courses there with high marks including Honors Spanish, A+ grades in Composition, and religious studies. She was instrumental in organizing a Community Gardens program that supplied fresh produce for the school cafeteria. She has studied poverty extensively and plans to pursue psychology or teaching to continue helping others. She has been accepted at Indiana University in Bloomington.

Chanel Tyra was described by her teachers as a student leader. Despite challenges growing up, she studied hard at North Side High School, completing a practicum in Early Childhood Education, worked a part-time job (buying herself her own car), and she was named Most Valuable Player on her basketball team. She has been accepted at Marian University in Indianapolis who’s Women’s Basketball Team was the 2016 and 2017 NAIA National Champions.

We are proud that for the sixth year in a row we have been able to help and encourage our local young people to advance toward their education goals. We’ve been able to do this by fundraising both from the local community and from our own staff, not by using taxpayer dollars. I want to thank everyone who worked on this project and those who donated to the cause. And to our Scholars—Congratulations!