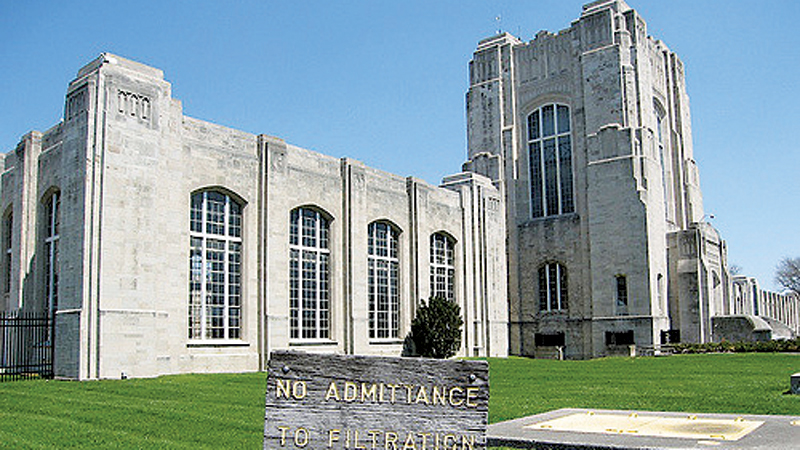 After 28 years with the city of Fort Wayne, she’s become something of an expert on the city’s Three Rivers Water Filtration Plant on Baltes Avenue downtown.

“This lets the public see what’s here and see how they get their water,” Zehr said after leading a tour of about 30 people around the facility one recent Saturday morning. “It’s a very important job, and people don’t realize how much goes into it.”

Marked by a looming gothic-style tower where the St. Marys and St. Joseph Rivers meet to form the Maumee, the 25-acre plant just east of Spy Run Avenue was originally sited there because the land already was owned by the city, although city leaders originally wanted to build something called “Three Rivers Park” on the land.

In 1931, when designers realized that making the building into something architecturally unique would add no more than one percent to the total construction cost, there was unanimous agreement that the edifice should be crafted in the collegiate gothic style. An architect noted at the building’s 1933 dedication, “Surely no more beautiful spot could be wished for than the Three Rivers Park site, affording as it does a splendid view from across the rivers in any direction.”

The building is, in fact, covered in Indiana limestone, and features ornate carvings on many of its walls to celebrate local flora and fauna. About 28,000 cubic yards of concrete was used in the original construction – enough to build a sidewalk from Fort Wayne to South Bend.

When it was constructed in 1933, the building cost $2.5 million, and the roof covered about 1.3 acres. After all the modern upgrades, the roof now lies over about 2.3 acres.

The plant’s process for cleaning the city’s water is a complex one.

To start the process, the plant pulls water from the St. Joseph River. Screens on the water intake pipes keep out trash, leaves, limbs and other large debris that may be floating in the water. Pumps then send the water to the highest point in the plant and – from there – gravity pulls the liquid through the rest of the system.

Once inside the plant, both a chemical and physical process is used to make it clean and safe enough to drink. The first step is to add ferric sulfate, polymer, lime and carbon; physically mixing the chemicals into the raw water with large paddles. This is called the “flocculation stage,” and causes contaminants to stick together in large clumps called “floc.” The carbon added to the water soaks up agricultural chemicals and helps remove offensive odors and tastes. The added lime helps to soften the water.

The water then goes through several filters to make sure it’s clean. Using filters made of sand, the microorganisms and suspended particles in the water are trapped in the tiny pockets between the grains of sand. The sand grains also attract many particles like tiny magnets. The sand is cleaned regularly to remove organisms and debris that are trapped in it.

And, in 2013, a pump room in the plant was retrofitted to add UV pipes to kill an organism in the water called cryptosporidium using ultraviolet light, as mandated by the Indiana Department of Environmental Management.

The water then leaves the plant on its way to homes, via a series of pumps, storage tanks and pump stations. In all, there is more than 1,177 miles of water mains throughout the city to deliver H20 for everything from drinking, cooking, bathing, washing the car, doing laundry and even firefighting.

Tours of the building are offered in the spring and fall, usually one Saturday a month. About 150 to 200 people typically attend the tours throughout the designated days, said Mary Jane Slaton, Program Manager for Fort Wayne City Utilities. Slaton said the tours let citizens get a peek not just at the complex operations inside, but the attractive building that supplies much-needed water.

“It’s just an opportunity to open it up and let people see what we do,” said Slaton, who’s been with the city for 25 years. “A lot of people in the city drive by here and wonder what goes on inside. Plus, they get to see the building and the unique architecture at the same time.”

The city is offering free tours both at the Baltes Avenue plant and at its pollution/sewage treatment control plant at 2601 Dwenger Avenue this spring. Dates and times for the tours are as follows: