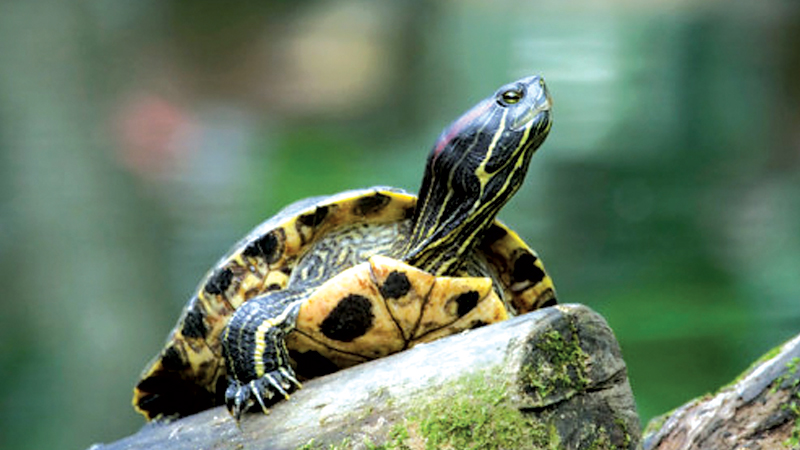 Seeing a turtle in the road ahead as I drove over a hill, I slowed to give the turtle plenty time to cross the road ahead of me. Turtles, I thought as I watched the slow progress of the one in the road before me, evolved before dinosaurs. Here was a creature from the past. Not this one. It might be sixty, eighty, even a hundred years old, but it hadn’t been alive since before the age of dinosaurs.

This was a small turtle, a pond or marsh turtle, a turtle seen most often with others of its kind on a log, a muskrat house, a floating mass of vegetation, sometimes one turtle on another, basking, soaking up warmth from the sun. Turtles are reptiles, cold blooded animals. They live in water and get warmth from water, from air and from the sun. When the temperature of the water in which they live is warmer than the temperature of the air, even though there is ice on the water they move about and feed. They are sometimes seen swimming beneath the ice. When the temperature of the air is warmer than the water they come out of the water and lie in the sun, armored reptile sun bathers.

The turtle I saw in the road that day was a painted turtle. It was an adult, full grown, its carapace, the upper half of its shell, about five or six inches long. It was only slightly convex, not crowned or high as a box turtle or a snapping turtle. It had spots of red on the sides of the carapace, yellow on the sides of its neck and head.

Painted turtles are one of the most common turtles of North America. Yet to see one in a road, out of water, is not common. A painted turtle or other water dwelling turtle which might be seen in Northern Indiana, a snapping turtle, a spotted, a map, Blanding’s, which is endangered, or musk turtle, also called stinkpot and stinking jim, seen out of water is either moving from a water hole that has dried up or it’s looking for a mate or a place to lay eggs.

All turtles lay eggs, scraping out holes in the ground with their back legs or flippers, then backing up to the hole and dropping the eggs in. When a female turtle has laid her eggs she covers them, then leaves them. The temperature of the ground determines when they hatch. After hatching the young turtles dig their way out, then forage for themselves. Water turtles make their way to a wetland as they feed.

A turtle I’ve never seen is a stinkpot or stinking jim. I’d like to see one, though I don’t want to get too near. They have scent glands like a skunk, two on each side where carapace and plastron join. From these they exude a foul smelling liquid. Fortunately for observers they can’t spray like a skunk.

Snapping turtles are other water dwellers and mature snappers are big. I saw an exceptionally big one once, near our barn, moving slowly in the direction of our marsh. I wish I had measured the length of its carapace. The record for the length of the carapace of a snapper is near twenty inches and that turtle looked that big.

Box turtles belong to the same category as water turtles but are more terrestrial, woodland turtles. Unlike painted turtles they have highly convex, domed carapaces. They are seen when the weather is warm beneath the canopy of a woodland.

There are other turtles, more than twenty species in North America.