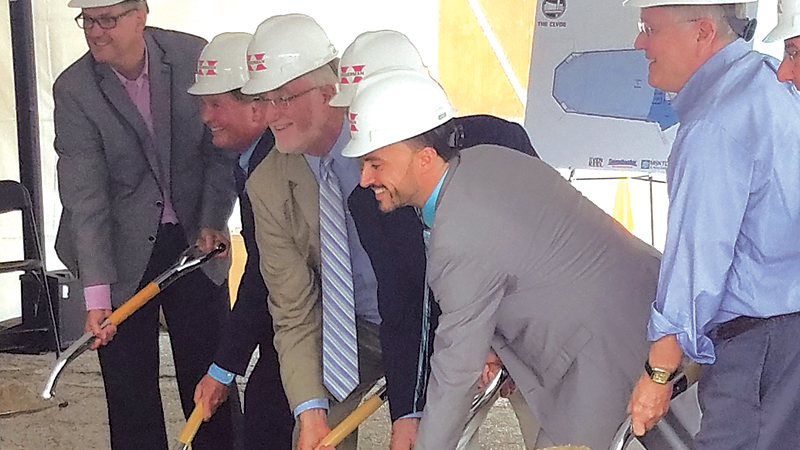 Nearly 100 people gathered under a makeshift tent outside the old Clyde Theater on Thursday, July 27 to watch area dignitaries make the first movements toward renovations at the long-vacant building.

The Clyde Theater at Quimby Village – as it was called years ago – was built by Clyde Quimby and first opened in 1951 as a 1,782-seat movie theater. Before long, it was a hub of activity for the south side, drawing moviegoers and other visitors throughout the region.

Percussionist Rick Kinney bought the building in 2012, inspired by his love of music and performance with hopes to turn the run-down old venue into a new spot for future generations to enjoy.

“I’ve promoted concerts in Fort Wayne since I was 13 years old,” Kinney said, “so I’ve been promoting concerts here for 22 years. I care a lot about our community. I’ve been here for 30 years, and it means a lot for me to see Fort Wayne grow.”

Kinney’s plans for the old theater include a 2,200-person-capacity, general admission, multi-functional performing arts and special events center, which he hopes will be like none other in the area.

More than half of the $5 million cost of the renovation is privately funded, with some public monies being used as well. The project received a $1 million grant from the Regional Cities Fund. And the Fort Wayne City Council also approved a $1 million load from the city’s Legacy Funds.

Plans are to transform the building’s cavernous, 10,400-square-foot, two-story lobby into an art gallery that will focus on sculpture, object, glass, and functional art.

The renovation also will add a dressing room and a performer’s lounge adjacent to the stage. Kinney believes the improvements will make the Clyde a one-of-a-kind spot in the region, drawing performances and performers that usually only make stops in larger cities like Chicago, Indianapolis and Cleveland.

As the major cheerleader for the theater’s rebirth, Kinney was given the task of ringing his handmade bell to signify the beginning of renovations. Not long after, a line of local dignitaries turned a heap of symbolic dirt with their ceremonial shovels to officially start work.

Fort Wayne Mayor Tom Henry — one of those manning a shovel — and there to speak and commemorate the occasion, chuckled as he remembered his youth at the Clyde.

“My wife and I, while we were dating, we used to go to the Clyde a lot,” he said, standing behind a wheeled podium. “And we used to spend a lot of time in the balcony,” Henry said, drawing laughs and winks from the gathered crowd.

Kinney said he expects construction to be done by spring of 2018, and he already is planning the venue’s first show, but he won’t divulge what it will be – just yet. Nevertheless, he’s excited by the possibilities of what’s to come.

“It’ll be something that’s not necessarily standard for this area,” Kinney said, “We have a state-of-the-art lighting and sound system that we’re planning for the inside of this building. It’s really going to be one of the best.”