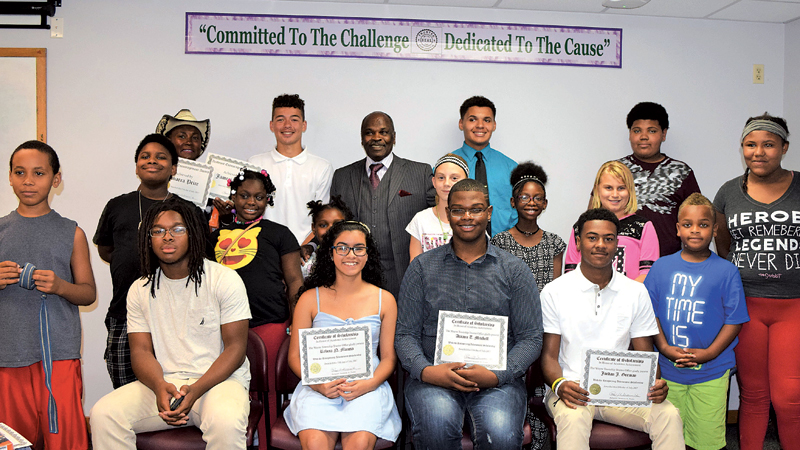 At the most recent Wayne Township Trustee Board Meeting held on the 11th of July, I presented sixteen students with our new Academic Encouragement Awards consisting of a Certificate of Achievement and a new Amazon Fire 7 tablet for each winner. The purpose of this award is to encourage younger students to stick with their studies, strive to improve and maybe apply for the Recognizing Achievement Scholarship when they reach their high school graduation.

I also presented, for the 5th year in a row, the $500 Recognizing Achievement Scholarship to six graduating seniors who are going on to higher education opportunities. I was so impressed with the quality of character shown by these students that I would like to share some highlights from their applications.

Shania Pernell
Determined, organized and disciplined. That is how Ms. Pernell’s letter of recommendation reads. During high school she maintained a 3.8 GPA—graduating with an Academic Honors Diploma in the top 6% of her class at North Side High School.

Shania wants to study neuroscience and will begin that this year by taking courses at Indiana Tech.

Asiann Mitchell
Mr. Mitchell is a musician who was awarded Top Combo Bassist at the Ball State Jazz Festival. He also studied piano during his high school career and has been a Drum Major with the North Side Marching Band. He is wants to study law and politics and hopes one day to become the first African-American Senator from the state of Indiana.

Asiann has been admitted to Indiana Purdue University at Fort Wayne.

Rebeca Mancia
Ms. Mancia graduated in the top 9% of her class, earning an academic honors diploma from North Side High School. Her teacher describes her as a disciplined leader who was a Drum Major of the school band. He said that “to gain this high level on the band she had to be at every practice and every competition on Saturday mornings,” demonstrating her dedication and drive.

After a close family friend was diagnosed with leukemia during Rebeca’s freshman year, she decided she wanted to go into medicine, become a pediatric oncologist, and to one day work at Riley’s Children Hospital.

Ms. Mancia has been accepted to IUPUI as a Purdue University Chemistry A.C.S. Certified Bachelor BS major for the Fall of 2017.

Jordan Gorman
Jordan’s teacher and recommender listed some of his achievements: on the Honor Roll at R. Nelson Snider High School all 3 years, tutored grades 3-5th students at Indian Village Elementary School, coached 4th-6th grade boys and girls basketball team through the Amateur Sports Academy, and he was an All-Conference Player for both a State Champion football team and the basketball team.

Following an early football injury Jordan became interested in studying medicine. He now plans to combine his love of sports and interest in medicine by studying Sports Physical Therapy at Wright State University—Ohio.

De’Mante Russell-Dobine
Mr. Russell-Dobine exemplifies the meaning of the Recognizing Achievement Scholarship—He brought his GPA up from 1.74 as a sophomore to a 3.1 as a senior. As a very young man De’Mante got involved in the gang culture, but then with a lot of hard work pulled himself up and out of that, and this year he graduated from Smith Academy for Excellence. He writes in his personal essay about his struggle and says that now he would love to give self-motivation rallies and tell others what he has learned from his efforts and experience.

Along with his hard work on academics, De’Mante has been involved in basketball, football and track.
De’Mante has been accepted to attend Ancilla College in Plymouth, Indiana, and he has a plan:
First to earn an associate’s degree in sports management, then a bachelor’s in psychology and then a master’s degree in exercise science.

He dreams of one day owning his own gym.

Again, I am so pleased to be able to recognize the efforts of all of these students, and I also thank the community and the Wayne Township Trustee Office staff. The awards I presented come not from tax dollars but from contributions we begin collecting when we have our annual Holiday Celebration in December (held this year on Saturday, December 16, 2017—Save the Date!)