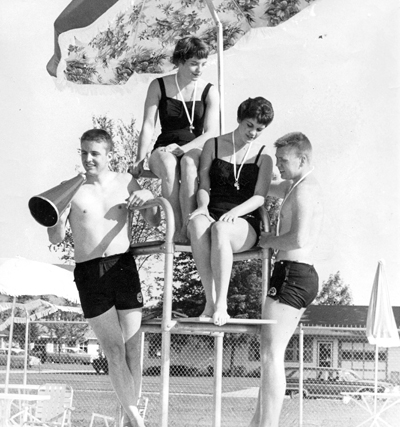 One day in 2012, a Pocahontas Swim Club board member called the bank to talk about some Poco business. “Oh, you’re not calling about the loan?” the bank officer asked. “No,” she replied. “What about it?”

As it turns out, the papers to repossess the pool were on the corner of the bank president’s desk, waiting to be signed. Pocahontas Swim Club, an Indian Village institution since 1955, was about to go under.

Pocahontas Swim Club isn’t fancy, but it probably was when it opened in 1961. The pool has always been managed by dedicated volunteers who serve on the Board of Directors, and has been able to hold its own financially since it opened in 1961. Unfortunately, between 2009 and 2012, Poco’s Treasurer, a trusted Poco member for years, embezzled approximately $60,000 from the pool. Much of the money was taken slowly, a little at a time. A huge chunk was taken from the pool in the form of a loan from the bank, made to purchase a new pool pump and do other improvements to the aging pool. The improvements were never made, the pump never bought and the money went to the Treasurer.

When the theft was discovered, the Treasurer was charged, prosecuted, found guilty and ordered to make restitution. Unfortunately, you can’t get blood from a stone; the money was gone. Poco has only been able to recover a few hundred dollars of the money since then, and the board doesn’t ever expect to be repaid in full.

Each year since 2012, the pool has been in a tenuous position, not knowing if they’ll reopen next year. Somehow they’ve always managed…until now. As of the end of 2016, the pool is now truly in dire financial straits. To get though the winter, the pool must come up with $16,500, and that just takes them to zero then they can start rebuilding for next year.

Well, no one wants to see the pool close. Thousands of Waynedale and Fort Wayne residents have grown up with Poco. It’s where kids learn to swim. Teenagers all over the city have learned responsibility in their first job there as a lifeguard. It’s a place for kids to step away from the TV, put down their iPhones, and get out to enjoy the summer the old fashioned way with friends in the sunshine on long, carefree, summer days.

To try and raise money, Poco is having a giant rummage sale at the pool this Saturday (the 24th) from 8am to 2 pm. In October, they are also throwing a bonfire as a fundraiser. Hosted by the owners of The Golden and 800 Degrees Pizza, it’s all the pizza and soft drinks you can eat, with a cash bar (see their website, www.PocoPool.org, for details and tickets).

The board also started a GoFundMe account with the goal of raising enough money to save the pool. So far they have been overwhelmed with the generosity and support Fort Wayne has shown in helping them meet their goal. If they survive the winter, all donors to the GoFundMe page will be invited to a pool party the Sunday of Memorial Day.

If you have memories of Poco and want to help, please do! Visit Poco’s website at www.PocoPool.org, or to the donation page at www.GoFundMe.com/SavePocoPool to help keep this Fort Wayne institution alive. The board truly appreciates all the support and generosity local residents have shown in keeping the pool afloat!