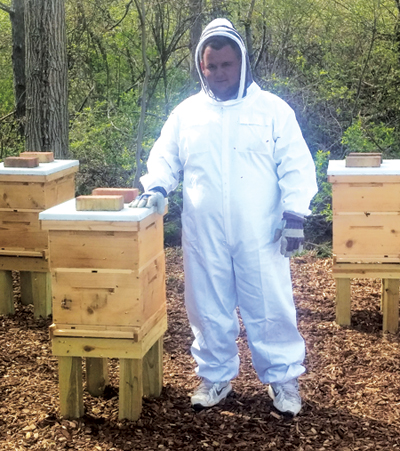 September is the sweetest month of them all, National Honey Month. And you can’t have honey without honey bees. Since 2006, honey bee colonies have experienced a very high and unexpected loss caused by colony collapse disorder and other stresses, such as parasitic mites and diseases. Studies have also suggested bees are dying because of pesticides with neonicotinoids.

Without bees there is no pollination; without pollination, no fruits and/or vegetables. When bees struggle, everyone on the food chain does too.

Joe Berghoff, a recent Bishop Luers High School grad, announced his intentions earlier this past year when he approached Southwest Honey Co. with the idea of a pollinating project to save the bees.

Beginning his journey with Cub Scouts when he was 7 years old, Joe had now reached his ultimate goal of earning the prestigious and honored Eagle Scout Award.

One of the requirements for a Boy Scout to earn the Eagle Scout ranking is to plan, develop and then give leadership in a service project that would benefit and be helpful to a school, religious organization or a community. This project is to benefit an organization other than the Boy Scouts.

“What better way to improve our community, and more importantly, our environment than to save the bees,” said Joe. “I saw a need, but didn’t realize until I did my research, how much we depend upon the bees for our food.”

Joe became “busy as a bee” when his proposal was approved by the Boy Scout officials as a suitable Eagle Scout project.

Eagle Scouts don’t directly build their projects. The concept is for them to plan and facilitate their idea.

Joe started by observing honey extraction and then taking a visit to the Southwest Honey Co. apiaries.

Supported by his family and friends, along with Wheeler’s Bees in Ossian, for his Eagle Scout project Joe began designing and planning 4 bee hives. Joe’s Langstroth-style hives were made from cedar wood, which consists of stacked boxes with various depths, a bottom board, inner cover and top cover.

But before he could go forward with the project, Berghoff needed funding to purchase the cedar wood and other supplies. And in one weekend, through generous gifts from his church, family and friends, Joe had raised enough money to support his Eagle Scout project!

Hive size, all of the parts with a bottom board were all factors to consider in building the beehive. Cutting, routing, stronger joints, gluing and screwing were also taken into consideration. Joe said the advice from local beekeeper, James Wheeler at Wheeler’s Bees in Ossian, IN, was very helpful when it came to creating the hives.

While in Scouts, Berghoff had earned 29 of the required 21 merit badges, donated over 100 hours of community service, ie., yard work for neighbors and packing lunches at the Franciscan Center, camped on many occasions at Pokagon State Park with Troop #19 and has served as a leader in the capacity of Senior Patrol Leader organizing camping trips and meetings, as well as serving as Chaplain’s Aid.

“Badges don’t make scouting. It’s the time you spend with your fellow Scouts and your Scout leaders. It’s about the lessons you learn along the way and the great teachers and friends that you meet,” said Joe. “I would like to thank several people who assisted me in obtaining my Eagle Scout Award. Fellow Eagle Scouts-Christian Ulman, Luke Sabina, Jacob Sabina and Sean Brouwer. Fellow Scouts-Ben Frecker, Patrick Sturm, Ben Westropp, Paul Braun and Luke Braun. Adults assisting me were my dad, William Berghoff, Scoutmaster Johnathan Brouwer, Dennis Ulman, Mike Shank and Charlie Heiny. And last, but certainly not least, Megan Ryan and Alex Cornwell with Southwest Honey Co.”

In earning his Eagle Scout Award, Joe has had to demonstrate and stay true to the Scouts Law in many areas of his daily life. He and all Scouts are required to “model loyalty and to be helpful, friendly, courteous, kind, obedient, thrifty, brave, clean in body, mind and speech and reverent to God in their faith.”

The majority of Scouts do not make it this far. Roughly only 4 percent of all Scouts in the world make it to Eagle Scout.

Joe completed his project this spring. Three of the cedar hives found a home at the Southwest Conservation Club on Bluffton Road in Waynedale. What made this project even more valuable is that Joe gifted one of the cedar hives to St. John the Baptist Catholic Church, 4525 Arlington Avenue, and in particular Father Andrew Budzinski, who has an interest in beekeeping. This fourth hive is kept at the home of a parishioner from St. John the Baptist Catholic Church.