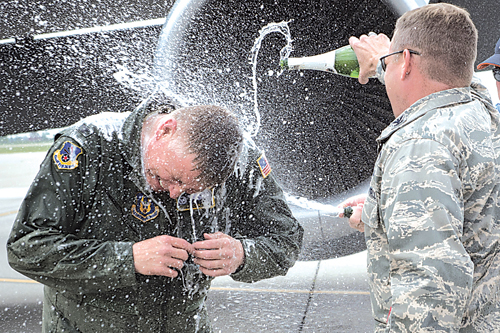 Laying in the yard of his parents’ house in Fort Wayne, Indiana nine-year old Doug Schwartz stared up at the sky and watched F-100s and F-4s fly overhead; pondering their destination, and planning his own.

Fast forward nearly 50 years and Col. Doug Schwartz is standing on a stage, facing his peers, his unit, his Airmen, his family and extended family pondering his next destination and planning for his future.

Schwartz retired from the Air Force reserve May 14, 2016 after 35 years of service.

He had been the commander of the 434th Air Refueling Wing since June 2014, leading the largest aerial refueling unit in the Air Force Reserve command.

“Coming to Grissom truly was coming home,” Schwartz said. “I’ve been fortunate enough to serve in many locations with many outstanding people around the world, but this is home, and I’m happy that I could complete my journey here.”

Schwartz began his career after graduating from Purdue University with a Bachelor’s in management.

He flew B52s until 1989 when he entered the inactive ready reserve.

That same year he became the 74th Air Refueling Squadron’s operations officer. He held that position until March 2007 when he took a leadership path to MacDill Air Force Base, Florida as the commander of Det. 1, 4th Air Force.

In May 2008 he became the 927th Operations Group commander at MacDill before departing in 2010 for the 932nd Airlift Wing at Scott AFB, Illinois as the vice commander. He served there for over a year before becoming the director of staff at 4th Air Force, March ARB, California.

In 2013 he returned to MacDill as the 927th ARW commander before returning to Grissom in June 2014.

“I have known Colonel Doug Schwartz since my first assignment in the Air Force over 28 years ago,” said Maj. Gen. John Flournoy, 4th Air Force commander. “He was then, and is now, one of the finest officers, gentlemen, and family men that I’ve ever had the pleasure of working with.”

It was Flournoy who asked Schwartz to come to Grissom in 2014 as the commander.

“When faced with making the decision of who to put in command of the mighty 434th Air Refueling Wing, I knew right away that Doug and Ann Schwartz were the perfect team to take this organization to the next level,” he said.

“With your help he and Ann have done a phenomenal job and we in 4th Air Force wish them the best as they transition to a new walk in life.”

It wasn’t just his superiors that Schwartz made an impact upon, it was also on local civic leaders as well.

“He brought many high ranking Air Force and Air Force Reserve leaders to visit Grissom with the purpose of making sure they, the leadership, are made fully aware of the capabilities of the men and women stationed at Grissom and to further promote GARB well into the future,” Job said. “He is very proud of Grissom, its personnel, its mission, its history of getting the job done not just right, but in an excellent manner.

As for the next phase of his life, Schwartz is working on that as well.

“Like everyone else, I have a long honey-do list that my wife Ann has been working on,” he laughed. “I can barely fit two cars in the garage so I’ll be working on that, catching up on sleep and generally seeing what opportunities are out there for us.”

“We’ve made great friends in several locations so it will be nice to visit and explore the opportunities available.”

As was his tradition, in departing Schwartz simply said, “take care of yourself, your family and each other. Be safe and be smart.”

The 434th ARW is the largest KC-135R Stratotanker unit in the Air Force Reserve Command. The men and women from the Hoosier Wing routinely deploy around the world in support of the Air Force mission.