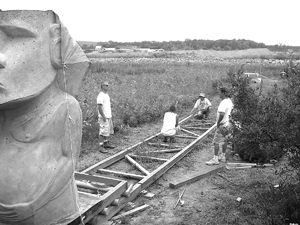 This is the third of four parts of the story that completes the mystery of the Moai statue found on Lower Huntington Road in Waynedale.

My brother–in–law Matt helped develop the launch pad I would need to pour the mold. The mold stands eight feet tall and a regular cement truck can only pour to a height of six feet. That meant lowering the mold at least two feet into the ground or raising the truck up to a higher elevation. We planned on doing both, bringing the concrete truck in on a hill and digging out the lower part of the hill to situate the mold which gave us the clearance we needed to pour the concrete.

On June twenty-second brother Dan and I transported the trolley and rails from my home to some land on Lower Huntington Road. The Lower Huntington Road property abuts the Hansen Aggregates blue stone quarry and I felt the quarry would be an appropriate backdrop to the Easter Island statue.

On July 6, 2011 it was time to pick up the statue mold from the lay-down yard, clean each piece with a power washer and apply a mold release agent to the fiberglass sections.

I had investigated mold release agents on the internet and located the substance I would need. It was a blue waxy concoction much like paste car wax. It required a lot of elbow grease and much sweat on that hot July day. I had never poured a fiberglass mold with concrete and I wanted to be sure the mold release agent would work. I took the newly waxed nose part of the mold over to Old Trail Road where Key Concrete was doing some street repair. My son Rob filled the nose with some excess concrete and later that night Boyd and I flipped the mold to see if the concrete would release. It did and it was with a big sigh of relief that the trial run had produced one large concrete nose.

On Friday July 8, Errol Dunn drove his pickup from his home in Columbia City to my place on Allegany Avenue and together we transported the mold pieces over to Lower Huntington Road where we reassembled them. The mold sections are held together with common nuts and bolts using fender washers for extra support around the seams. We finished about noon and after a through tick check we called it a day.

Does anyone really care about how a group of Polynesians half way across the globe in the middle of the Pacific Ocean carved and moved statues hundreds of years ago? I was beginning to ask myself those same questions. And I really didn’t have any answers…yet here I was on this mission. Back home my driveway needed replaced and some windows needed repairing but here I was out on Lower Huntington Road chasing wild geese.

The name “Easter Island” was given by the island’s first recorded European visitor, the Dutch explorer, Jacob Roggeveen on Easter Sunday, 1722. It is an island in the southeastern Pacific Ocean, at the southeastern most point of the Polynesian triangle. It is a special territory of Chile that was annexed in 1888, Easter Island is famous for its 887 monumental statues, that were created by the early Rapanui people.

In recent times the island has served as a warning of the cultural and environmental dangers of overexploitation. European colonizers and slave raiding of the 1860s devastated the local peoples.

So again, why? Won’t an Easter Island Moai look a bit out of place in Waynedale?
It wasn’t just the unfinished Moai moving project that had been bothering me. It was a series of events occurring over a 40-year period. My first glimpse of the statues was on an old Mail Pouch tobacco lithograph that I saw in the 1970s and then there was an 18-inch tall wooden carving of a Moai that my wife had brought back from Costa Rica before we ever met Charlie Love. And then after meeting Charlie and reading his information on Easter Island it was as if the project was choosing me and not me choosing the project, so for better or worse I continued to move forward.

Monday, July 11, 2011, I visited the project site on Lower Huntington Road. I took along some Round Up and sprayed a corridor from the front of the property to the rear.

I tarped the statue mold as the eyes and nose were visible from Lower Huntington Road and I was attempting to keep a low profile. I didn’t want any media attention unless the moving system worked as designed. I also wanted to keep water out of the bottom of the mold to make sure the four-inch thick by five-foot square platform wouldn’t get wet and bust out the anchor bolts.

By July 14, a heat wave had settled into the Midwest. The temperature rose into the 90s with triple digit heat indexes. Although I was hoping to get the mold poured before August 2011, it was just too hot to be doing outdoor work and the statue project was put on hold. The tennons on the wooden rollers had shrunk from an original diameter of four inches to three and seven eights diameter and the hot sun wasn’t doing the treated lumber any good.

My son Rob came over to the project on Wednesday, July 27. He brought along his wife Sherry and their two girls, Hanna and Hailey. I wonder if the girls will remember this evening. Rob climbed down into the mold and tied some re-bar. By the time he climbed back out his shirt and shorts were drenched with sweat and he looked like he’d been in a downpour. There had not been any rain in about a month and the trolley system which was manufactured with treated yellow pine was shrinking and splitting just as fast as the rollers. Still, the project was moving forward and we were now ready for the concrete.

My brother Dan and I drove to Speedway Concrete on Industrial Road. We climbed the three flights of steel stairs and talked to Chriss the dispatcher. Chriss gave us a couple of color charts and recommended the type of aggregate. He walked us through the different problems that can occur when pouring color concrete. I wanted the statue to be a dark grey-green as that is the color of the volcanic stone on Easter Island where the statues were originally carved. The hat that sits atop of the statue was carved from a quarry on a different part of the Island. The hat material is of a reddish tan and we chose appropriate colors for both parts.

It took a bit of calculating to compute the number of yards of concrete that was needed. The bottom of the statue is an oval configuration and there are many variations allowing for the nose and facial features. I calculated as close as I could and then threw in a half yard extra for good measure. It looked like 3 yards for the statue, three quarters yard for the hat and a couple more for the base to sit it on. We needed some railroad ties to build a small ramp for the concrete truck as we were still marginal on having enough fall to get the concrete to the mold.
On August 6, 2011, Boyd and I drove out towards Columbia City to pick up some discarded railroad ties. The ties had been used as landscaping timbers and were in various stages of decomposing. They were also damp which added to their already clumsy weight. We sorted out 10 ties, loaded them on Boyd’s truck and transported them to the Lower Huntington property. Afterwards, we stopped by the Hook & Ladder for some much needed refreshment and then called it a day.