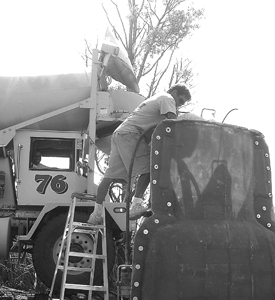 This is the fourth of five parts to the story that completes the mystery of the Moai statue found on Lower Huntington Road in Waynedale.

The next day I stopped at the concrete company and measured the wheel base of a concrete truck to make sure the ties were long enough to accommodate the width of the tires. We made two ramps, one for each tire. The ramps gave me an extra foot of height and put me very close to the height I needed. I went back to the concrete truck to do some more measuring. I still wasn’t sure if I would be able to get the fall I needed to get the concrete flowing down the chute. I called my son Rob for some more advice.

We were now very close to being ready to pour. I still needed to do forming for the Moai pedestal and I called on brother Dan for some more help. I was afraid of going to the well too many times. I figured I was close to having all my friends and family putting my number on call block. Still, I was getting closer to it all being over. Either way it would all come together or it would all fall apart. The project was coming to an end.

Wednesday, August 17, brother Dan brought over the needed lumber for the pedestal base. We formed up a platform five by five feet by two feet tall. We would work awhile and then jump in Dan’s pickup truck for an air-conditioned water break. Wednesdays are usually bad for Dan as that is the day he gets his chemo apparatus unhooked. The medicine reacts badly to sunshine so Dan was wearing a long sleeved white shirt and a sun hat. We finished up about 5:00 PM and went over the final calculations for the amount of concrete we would need. My amount seemed short to Dan so we used his figures and decided to order four and a quarter yards for the Moai and two and a half yards for the hat and base. I called my son Rob to give him the numbers so he could call in the order Thursday and the pour was planned for Friday, August 19 at 2:00 PM.

Friday arrived quickly which is always the case when you’re doing a pour. It makes me nervous, waiting for the sound of the cement truck rolling down the road. There are always concerns… Will the ramps hold the truck? Will we have enough fall in the chute? Will the forms hold? It makes me appreciate the people that do this for a living; their skill and diligence is apparent. Rob guided the driver up the ramps and added a section of chute. He was four inches off the center of the form so he had him back down and re-set. Second try, a perfect position. The concrete came down the chute and started dropping to the bottom of the mold, making a spluding sound as it coated the re-bar and worked its way into the crevices. Rob re-positioned the steel and used a vibrating tool (Donkey Dick) to eliminate honeycombing. The pour went fast and soon it was over. The statue mold was full and everything had held together.

The next day, Sunday, I striped the fiberglass mold. Rob and his family came over to lend a hand and then my wife Mary showed up to take some pictures. It was a beautiful sight, eight foot tall, and weighing in at 14,000 pounds. I was figuring the weight according to how much cement we had used but it was still a rough estimate. Rob was anxious to see if it would roll. He picked up a five foot 4X6, levered it between the launch pad dirt and the trolley and proceeded to move the statue a few inches forward. Now we knew the system would work.

We scheduled the final pour of the hat and the pedestal for Monday, August 22. Brothers Dan & John (retired Dana) were both there as well as Dan’s sons, Ben & Dan Jr. I was glad I had used Dan’s numbers for the amount of concrete needed as my numbers would have been low. There is no substitute for experience when pouring concrete and having my son Rob and my brothers and nephews around was extremely helpful.

The concrete for the hat and platform arrived at 2:30 PM Monday afternoon, August 22. Brother-in law, Matt Schmidt, helped me cut the re-bar and brother Dan showed up for the afternoon pour. Everything went well and by Tuesday I was striping and cleaning forms. The hat form turned out to be a real chore. My older brother Bill (retired GE) stopped by and together we used a lever and shims to maneuver the fiberglass mold to different angles of attack to try and extract the mortis part of the configuration. By Thursday morning we finished the job but there was still much to do before moving day. The trolley system had developed some twists and turns on the lower runners.

On September 14, Wednesday, Boyd and I went to the work site to try to roll the statue forward. Rob had already moved it a little on August 21 but after sitting for three weeks we wanted to move it to make sure we weren’t getting any flat spots in the rolls or dips in the rails. We levered two 12 foot 4X4s between the launch pad and the trolley and it rolled forward beautifully. I was again much encouraged with the progress. We went to the lake for the remainder of the day and caught some bluegill in celebration of the event.

On Thursday September 22, I found some cable I had purchased for guying a TV antenna. It was plastic-coated stranded cable rated for 184 pounds. I drilled a couple of holes in the trolley rails and sank two, half-inch lags in to attach the cable. I figured by doubling the cable I could get about 400 pounds of strength.
On Friday, I borrowed my son’s pickup, fastened everything together, hooked into the Ford front frame hooks and backed her up. The cables stretched some but then the statue moved forward about a foot. That was good enough to let me know that the cable wouldn’t break. The next step would be to hook a pull rope to the cables and replace the pickup with people power to do the move manually.

I was still trying to figure out how to get the hat on. The hat weighed a ton and a half and we needed to lift it on to the Moai that was eight feet tall. The easiest way would be to bring in an industrial forklift and simply lift it and fit it. I knew that the Easter Islanders (Rapanui people) did not have the convenience of bringing in a forklift to apply the hats. But, figuring out how the Rapanui people put on the hats was not part of my project. Putting the hat on while the statue was in a reclining position and then levering the hat-statue combination into an erect position had already been accomplished by another group so I was just interested in getting the hat on by the simplest and cheapest means possible.

The one thing I was trying to accomplish was testing the movable rail system, leap frogging the rails forward as the Moai moved.

I had also not figured out how to get the Moai from the wooden trolley to the pedestal, (ahu). The Moai were probably placed on the ahu via a long incline plane but I was not interested in creating a long ramp. I was just anxious in getting the move completed.
To be continued..