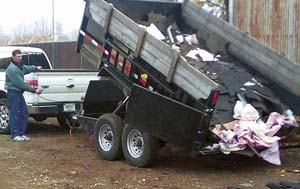 This new residential roof recycling capability is part of a national strategic alliance between Owens Corning and Heritage Environmental Services to create a program that will recycle old roofing shingles and re-purpose the asphalt to pave new roadways.

Since Owens Corning Roofing & Asphalt launched the industry’s first shingle recycling program, nearly 50,000 tons of material has been recycled into paving for roadways rather than ending up in landfills. This amount reflects recycled shingles from more than 16,000 homes and is the equivalent of 50,000 barrels of oil from which an average car could drive approximately 50 million miles or the equivalent of nearly 2,000 times around the earth.

This impressive milestone has been reached with the participation of nearly 50 Owens Corning Roofing and Asphalt Preferred Contractors. Each of these contractors have signed the Shingle Recycling Pledge committing to 100 percent recycling of asphalt roofing shingles removed during a project unless travel distance or containments do not allow the material to be recycled.

As part of the opening ceremony, used roofing materials from local homes were unloaded at the new recycling center to visually demonstrate the impact shingle recycling has in reducing landfill waste.

Following the ribbon cutting at 11400 Bluffton Road in Waynedale, a representative from A & B Construction was honored for being the first local contractor to sign the shingle recycling pledge to recycle 100 percent of used roofing materials. Additional area roofing contractors who were also participating in the recycling initiative were also in attendance.

“Through a strategic alliance with Heritage Environmental Services, Owens Corning Roofing & Asphalt is proud to be an industry leader and first roofing manufacturer to launch a cost-effective solution to simplify shingle recycling by connecting its Preferred Roofing contractors with convenient recycling facilities,” said Barry Hornbacher, shingle recycling business manager, Owens Corning. “In addition to developing a convenient recycling program that maximizes participation among both contractors and homeowners, we are also focused on addressing the needs of architects and green influencers to help them obtain certification credits under green building standards. This is especially critical to the participants attending the 2010 Greenbuild Expo in Chicago, a city where shingle recycling is already available.”

Environmental Services, the largest privately-held environmental services company in the United States, operates the recycling locations as part of the strategic alliance. Heritage brings unparalleled expertise with environmental standards and ensures that the process meets all the necessary criteria for safe recycling. With the combined efforts of Heritage and Owens Corning Roofing & Asphalt, material that would have been wasted will now be reused and made into roads.

Fort Wayne is the sixth market in the U.S. to gain this capability. The program is also currently active in six other markets, including Indianapolis, Cincinnati, Chicago, Denver, Minneapolis, and Nashville, Tenn., with additional market expansion planned in the near future.

Given the fact that recycling a home’s old roofing shingles (three tons!) is equivalent to recycling a year’s worth of household waste, homeowners recognize they can have a significant impact on the preservation of otherwise wasted resources through the shingle recycling program.