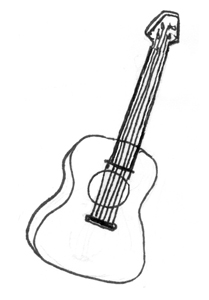 Part one of two

Deep in the Louisiana bayou in and old fishing shack, hangs a painted guitar. The old shack is half hidden by moss covered cypress trees. It has a tumbled down porch with a rocker on it. Fishnets hang from the side of the shack. In the swamps nearby lurk alligators, snakes and other creeping things. Old Charlie lives in this dilapidated structure. He is a Cajun and speaks French. His parents built this house when they moved from New Orleans years ago. His dad was a caretaker for the nearby plantation and did fishing on the side. Those were the days when crayfish and shrimp were plentiful. The painted guitar looks out of place. And besides, who ever heard of a painted guitar? Most guitars are made from beautiful woods. This one is rather strange looking. It has been painted white and has Aztec-like symbols on it. Where did this strange looking instrument come from anyway?

Let me tell you an unbelievable story…

Many years ago in Italy there lived a famous guitar maker who was called Antonio. He was noted for his fabulous guitars because they sounded like nightingales when they were played. Some say that old Antonio guitars had a magical quality about them.

One day, a man approached the master and asked if he would consider making him a guitar. The old man agreed and after settling on a price, the man left to return later. It turned out that he was a prince and he wanted to serenade his beloved wife. Subsequently, he went to war and was killed in battle. His beloved wife got rid of all things, except the guitar since her prince played it wonderfully just for her. She was of French royalty and royalty at that time were being prosecuted. The princess moved to Italy to escape the persecution and later joined a group sailing to America to seek a new life. Once in America, they heard about the West. Her newfound friends decided to become homesteaders. They started on the treacherous journey in a wagon laden with all their possessions. The trip was rough and difficult for this former princess. Unfortunately Indians somewhere in Montana attacked the homesteaders. The Indians, not knowing what a guitar was stole it. The princess was grief stricken. The Indians painted the Guitar white and added symbols of their gods and worshiped it…