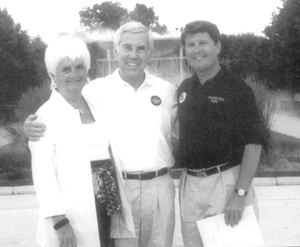 Just around the corner, Fort Wayne will celebrate its 215th birthday, and the Headwaters Park Flood Control Project will celebrate  its 10th anniversary. On October 22, 1999, Gov. Frank O’Bannon, Mayor Paul Helmke, and other dignitaries cut the ribbon officially dedicating and opening the new park and festival center to the public.

For over two decades, the private sector has played a major role in the development of Headwaters Park, which is one of the city’s flood control components and has already mitigated damage in Fort Wayne. The Headwaters Park Commission was assigned the task to design the 30-acre park, raise $10 million in private funds to build it, and establish  a maintenance endowment that now stands at approximately $1 million.

Having completed its work, the Commission dissolved and the nonprofit Headwaters Park Alliance was formed to provide full time management for the park and to nurture its growth. Ten years ago it was believed Headwaters might only attract a few events in addition to Germanfest and the Three Rivers Festival. Today, over 40 events are held in the park from April through October that range from festivals, weddings, nonprofit events, and other charitable fundraisers. From late November until March 1, the outdoor ice skating rink attracts some 20,000 skaters each year. To date, we have seen over 115,000 skaters and as many spectators enjoy the rink and annual ice skating shows performed. Thanks to foundation grants raised by the Alliance, ice skating rates have not increased in five years. Festival and event fees have not been raised in four years.

The Alliance has raised $5 million over the past decade to operate the park and make significant improvements. Among these are concrete and infrastructure repairs, landscaping additions, vaccinating over 100 ash trees from the emerald ash borer pest, and establishing the outdoor ice rink. Perhaps the most notable and appreciated improvements came with the Lincoln Financial Pavilion and the Madge Rothschild Pavilion. The Lincoln Pavilion, paid for almost entirely with private dollars, covers 28,000 square feet on the east festival plaza. This welcome shelter is not only a beautiful landmark in the park and the city, but it has helped attract a number of festivals and other events that previously did not have a home. It also provides a needed cover for the ice rink and has extended both the festival and iceskating seasons. The Rothschild Pavilion, paid entirely by a grant from the Madge Rothschild Foundation, is becoming the perfect place for smaller events, particularly weddings and nonprofit fundraisers.

The stewardship provided by the Headwaters Park Commission and Alliance has saved the taxpayers of Fort Wayne money by raising thousands of dollars each year from foundations, corporations, and individuals. This money has gone back into the park in making many improvements and also added to the growing maintenance endowment, which is designed to help provide financial support to Headwaters Park for decades to come. These two entities have helped to create a beautiful lasting legacy to our community. For the past 17 years, it has been my privilege to serve as their executive director. Together, with the help of many private donors, a strong membership base, and support from the city and state, we have built a treasure to the community that helps provide flood control, downtown revitalization, and entertainment to over 500,000 people each year. We are proud of our record and for our service to the community.