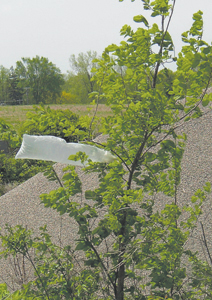 Have you ever been tangled up with the problem of plastic bags stuck in trees? As I traveled around the Waynedale area I noticed the many plastic bags flapping by their handles from the branches of trees, waving in the breeze and out of reach. Noticing should lead to removing those bags and other debris, especially this time of the year. Spring cleanup is a dirty job — but someone’s gotta do it.

An Irishwoman says that in Ireland bags in trees are known as “Witches’ Knickers.” In South Africa some have suggested they should be the new national flower. In Australia the humble plastic bag is facing a 25-cent levy in the hope consumers will break their 6.9 billion-bags-a-year habit.

Just outside my house window is a huge tree. Caught in the branches of that tree is a white plastic bag. This bag has been tangled and suspended several feet in the air for at least as long as I can remember. It would be nice if this bag would just fly away, though I’m not optimistic that this will happen. It’s tangled pretty good. I have donned it my “witches’ britches.”

I first noticed this problem when the gusts of spring that blow through the trees agitate the bag and cause it to flap quite audibly. This problem called an annoyance, I suppose, is only manifest when the windows are open. When the breeze picks up soon I’ll be subject to that bag’s rattling. What irritates me about the bag is that, despite its trifling nature, I’m powerless over it. I can’t remove it from the tree, it is up too high, nor can I ignore it. The bag imposes itself upon me even though it is one of a million innocuous white plastic bags used to carry goods.

Ian Frazier, a writer for the New Yorker, recently wrote “Bags in Trees: A Retrospective.” More importantly, Frazier is the co-inventor of the Bag Snagger, a long aluminum pole with a pincer created for the purpose of removing bags from trees. Frazier and a friend used it to remove bags from trees in and around the Midwest.

Frazier writes: “The basic thing that gets in a … tree is the white plastic deli bag. It reaches the tree with the aid of the wind, or (as I sometimes think) by its own power. With its filmy whiteness and its two looped handles, it suggests as self-levitating underclothes…It does not have a soul, but it imitates one…Its prehensile handles cling to any branch that comes within range, and then grab hold for eternity. This bag is not hard to get out of a tree when it is still fresh, but as it ages and shreds it becomes more difficult.”

These conventional plastic bags, made of polyethylene, do not degrade and have become a serious source of pollution. Plastic bags frequently end up clogging rivers and drains and harming wildlife or being blown up into trees. So, if you can reach those bags, get rid of those sightly “witches britches.”